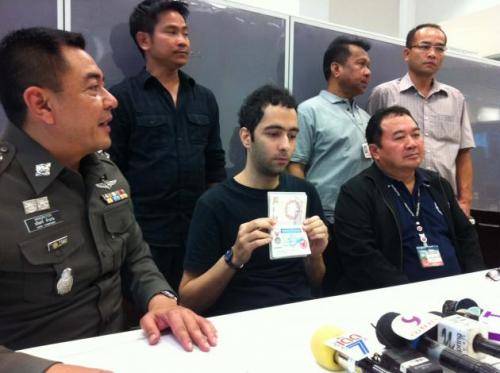 PHUKET: A Thai visa sticker believed stolen from the Thai Embassy in Malaysia has been found in the passport of a suspected drug smuggler in Phuket, according to an informed source.

The suspect was arrested by Phuket Immigration police yesterday morning on charges of possessing an undisclosed amount of cocaine.

“Further checks reveal that he entered Thailand with his passport containing one of the visa stickers that had been reported missing,” the source said, adding that police were investigating the case further in a bid to nail down all accomplices.

According to the Foreign Ministry, more than 250 of the “missing” visa stickers have already been used and 105 people with passports with stolen stickers had already left the country. It was recently reported that 300 of the visa stickers disappeared from the Thai Embassy in Kuala Lumpur.

“Immigration officials nabbed five of them at Suvarnabhumi Airport,” the immigration chief said.

Meanwhile, a source said a Thai woman referred to as “Mama” was allegedly behind this case.

Ongoing investigation suggests that the foreign nationals handed over their passport, a photograph and 10,000 baht to “Mama” to apply for the visa, and a few days later, they were required to pay another 20,000 baht to retrieve their passport with the relevant visa.

Pol Col Chartchai Iamsaeng, deputy commander of the Immigration Bureau, said yesterday that one or more embassy officials might be part of “Mama’s” gang.

“We are working with the Foreign Ministry to determine the connection [between embassy officials and the gang],” he said.

He added that members of the gang were not Muslim, though security agencies were looking into the case to see if it might have a hand in the unrest in the Deep South.

A source who was once part of the Immigration Bureau’s investigation team said he had learnt that Thai visa stickers had gone missing at other Thai embassies as well.

The source also believes that some embassy officials might have a hand in the illegal trade of Thai visa stickers.