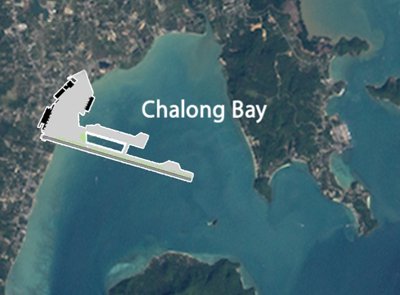 CHALONG, PHUKET: Plans for a second major Phuket airport, to be situated in Chalong, have been tendered and construction could begin as early as February next year.

A 140-million-baht feasibility study and pro forma environmental impact evaluation of the project are nearing completion, according to Jet Terminals Co (JTC) of San Diego, California.

“On the basis of the research and geo-testing data we have developed thus far, we see no reason why a regional airport of the type proposed [by Island Assets Co Ltd] cannot be sited on the 316-rai plot selected. We will make our formal recommendations to the civil aviation authority at a hearing in Bangkok next month,” said George Richards, CEO of JTC yesterday.

Chalong was proposed as the site for the new airport as it already has Immigration facilities which currently deal only with arrivals by boat.

Advocates of the project also note that the island’s only other airport is far away from the south end of the island.

Chalong OrBorTor spokesman Naroot Tongchai told the Phuket Gazette this morning that with the number of tourist arrivals in Phuket expected to reach 9.8 million by 2018, development of the new facility is “essential” for Phuket.

“We know that some people, particularly foreigners, will object to the project, but the Phuket economy is the most important thing for all stakeholders right now. Tourists come and go, but we live here, so we are going to do it.”

When asked about noise and road access into the new facility, he said he was aware of “possible future problems,” but that “those things can be fixed later if they really become a problem sincerely.

“And traffic will maybe get better a little bit now because not all arriving passengners will need to make the long road trip [to Chalong] from the old airport.

“Please understand that HAFD is not a big project and that only flights from China and other Asian points of origin will be accepted.”

HAFD will also serve as a hub for local seaplanes and outer-island ferries that some say could benefit from the steady flow of tourists into the new airport.

When asked what ‘HAFD’ might stand for, Mr Naroot would only say. “Happy April Fools Day”. The Gazette joins him in wishing our readers the same.