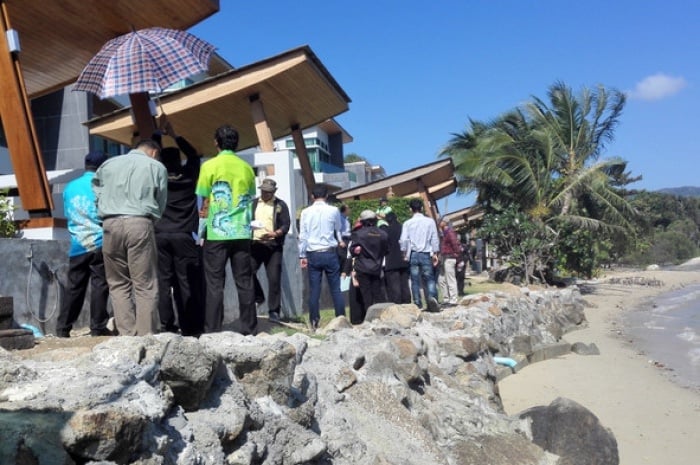 PHUKET: An inspection team yesterday investigated the site of an upscale estate by the Eva Group in Rawai ahead of a trial to be held “as soon as possible”.

The inspection was led by Tawatchai Sontiwanit, chief judge of the recently formed environmental division of the regional Administrative Court responsible for Phuket. Nitisak Chobdamrongtham of the Architect Council of Thailand joined as an expert witness.

Judge Tawatchai revealed that he was leading the investigation ahead of conducting a trial in which Rawai Municipality and the provincial standing committee for approving initial environmental evaluations (IEEs) – also called environmental impact assessments (EIAs) – are named as the accused.

“Experts will conclude their inspection and submit their report to the Administrative Court,” Judge Tawatchai said. “We will review the report and pass it on to all parties, including Rawai Municipality, the standing committee and the Eva Group.

“Once the parties receive the report, each party will be able to refute any claims made therein and explain their actions to the court.

“Mr Aroon will provide all documents relating to the approval of the construction of the estate to us within seven days, then we can set the date for trial.”

Judge Tawatchai declined to reveal specifically what the two organizations were accused of, or why the project site was under investigation.

“We cannot reveal any details of the investigation at this stage,” he said. “As the case is under the judicial process, anything we say might be used in the court and affect the case. We will report our findings to the court only.”

Mayor Aroon and Mr Nattawan both signed affidavits to confer that they had witnessed the investigation.

A representative from The Eva Group was present for the inspection, but declined to comment.

England get revenge with 21-16 victory in Cardiff