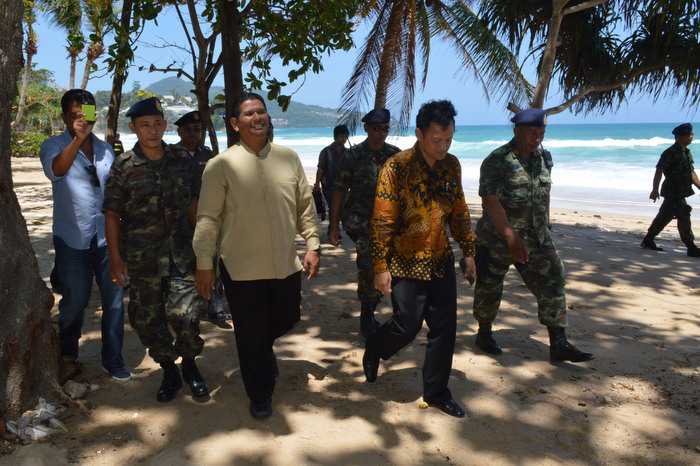 PHUKET: Weddings have been banned from being performed on at least four of Phuket’s west coast beaches, confirmed one official, but many beach town mayors are hesitant to prohibit seaside nuptials.

However, Mr Ma-ann did not mention what the penalty would be for anyone who ignored the ban.

“Couples are allowed to take wedding photos on the beach, but holding wedding ceremonies is not allowed, even though the event is only temporary,” he explained.

“With beach chairs and umbrellas forbidden, to be fair no other commercial activities will be allowed on the beach.”

Local governments have been faced with the wedding question following the island-wide beach cleanup ordered by the National Council for Peace and Order (NCPO), despite there being no official order prohibiting the practice on the island’s beaches.

“I have yet to receive any official order from Provincial Hall regarding this issue,” Patong Mayor Chalermluck Kebsup told the Gazette yesterday.

“In my opinion, I think beach weddings are a great way to promote Phuket’s beaches. As of right now, some commercial activities will be allowed in Patong, as long as the operators keep the beach clean.

“I see no harm in permitting beach weddings; they are not permanent and they provide positive, free promotion for the island.”

Despite supporting the act, Mayor Chalermluck told the Gazette that she would raise the topic with Vice Governor Chamroen Tipayapongtada and other island officials.

“I was not made aware of any ban, but I don’t see an issue with allowing beach weddings,” he said.

“If we ban beach weddings, we must also ban everything else, including allowing television or film crews to use our beaches as sets.

“However, if an official order is handed down I will of course follow it.”

“Since the NCPO announced the beach cleanup campaign, I no longer feel I have the authority to make decisions regarding beach activities,” he said.

“I will pass the issue on to officials at the district and provincial levels. Anyone who wishes to perform a wedding on the beach can contact those offices.”