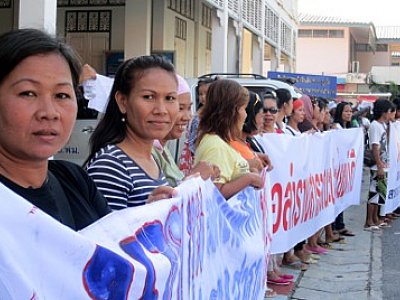 PHUKET: More than 100 vendors from Laem Singh Beach gathered outside Phuket Provincial Hall today to demand that the government investigate Chanote title deeds for the beachfront land at the scenic cape.

The call to investigate the land titles follows the claimant landowner ordering a fence to be built along the property boundaries – the final result of which will effectively prevent people from walking across the land to get to the beach.

The beach at Laem Singh, just south of Surin Beach on Phuket’s west coast, is accessible only by parking on the side of the road and following a path down the steep hill across the property in question.

Somneuk Kohkaew, one of the beach vendors, arrived at about 9:30am today to hand a formal letter of complaint to Dusadee Arayawuth, Secretary-general of the Office of the Public Sector Anti-Corruption Commission (PACC).

“We make our living there. More than 500 tourists visit Laem Singh Beach every day. If the entrance is closed it will affect Phuket tourism because tourists like that beach.

“I would like to ask the government to investigate the Chanote land title deeds. That land should be public land,” said Mr Somnuek.

Beach masseuse Siriporn Thinarum pleaded, “Please do not let the business owners cut off access to our livelihood. More than 100 of us earn our living on that beach.”

Col Dusadee, who made headlines on Saturday with the announcement of the investigation into corrupt officials illegally issuing land title deeds in Phuket, agreed to investigate the land in question.

“We have received many requests during this trip to investigate land in Phuket,” he said.

“We will also investigate this,” he added.