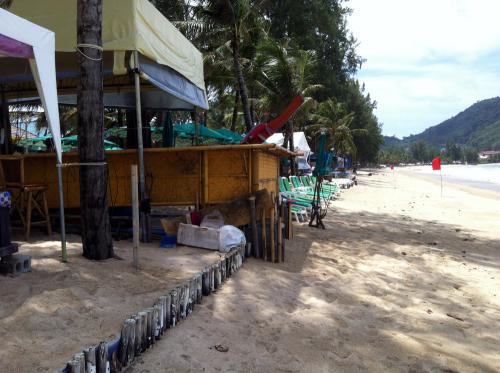 PHUKET: Shop and bar owners that have been found to be encroaching on Kamala Beach have until tomorrow to take down their offending structures.

If they are not removed voluntarily, they will be demolished, said Kamala Tambon Administrative Organization (OrBorTor) Vice President Seri Larpmark.

“We found many shops and bars encroaching on the beach, and called the owners to a meeting a week later to ask them to take down their illegal constructions,” Mr Seri said.

The owners were told they had two weeks to take down the structures and all agreed, he added.

However, a few days later, they told Mr Seri that they had contacted a number of demolition companies but none was available during the agreed-upon two-week period.

“They asked to postpone the deadline,” Mr Seri said.

However, the OrBorTor did not agree, and sent the owners a warning letter and asked them all to come in to the office to sign a letter acknowledging the consequences of not doing the job themselves.

“October 4 is the deadline. If they have not pulled down the buildings by then, we will demolish them ourselves,” Mr Seri said.

Mr Seri said the OrBorTor would get help from the Kathu District Office and Phuket Provincial Officers to clear the area of illegal structures.

“The shop and bar owners will be fined 2,000 baht for construction on public land without permission,” he said.

Phuket floods already, and more rain on the horizon