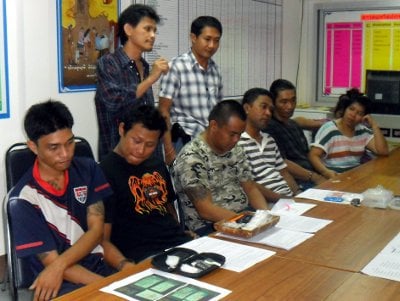 PHUKET: A former volunteer member of the Phuket provincial drug suppression unit was among seven members of a gang of alleged drug dealers arrested in Chalong on Tuesday.

Chalong Police rounded up the gang at a variety of locations in Chalong and Karon after a successful sting operation.

A total of 123 grams of ya ice (crystal methamphetamine) and 432 ya bah (methamphetamine) pills were seized, along with three digital scales, four packs of re-sealable plastic bags and two cars, one of them a BMW.

Presented to the media at a press conference at Chalong Police Station yesterday, six suspects who confessed to a variety of drug-related charges were identified as Phuket residents: Prasit “Pay” Sapchumchuen, 25; Wipas “Wat” Nuyuprai, 38; Kitisak Wongnayat, 19; and Turanon “Ball” Khampluk, 29.

A seventh suspect who denied the charges was identified as Phuket resident Boonyakiat “Kiat” Kanghey, age 30.

Upon arrest Mr Wipas presented to police a card identifying himself as a member of the Phuket Provincial Drug Suppression Unit.

Subsequent investigation reveled that his role in the anti-drug squad had been terminated due to unspecified “inappropriate behavior”.

Mr Wipas also once worked as a driver for a former Phuket vice governor, they learned.

Chalong Police investigations inspector Jaran Bangprasert told the press that the roundup started with information from an informant that Mr Prasit was part of a large drug-dealing network supplying bargirls and tourists.

His arrest in a sting operation and subsequent questioning led to the other arrests, he said.

Phuket Poll: Thaksin due back soon