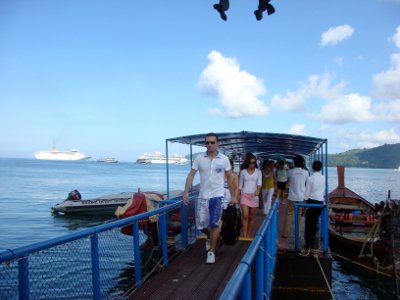 PHUKET: Phuket officials gathered in Patong yesterday to welcome 900 tourists who arrived from Indonesia aboard a Royal Caribbean cruise ship.

Officials from the TAT, Patong Municipality and Kathu Police welcomed the tourists as they disembarked from the seasonal pier at the south end of Patong Beach at 10am yesterday.

The arrival was another indication that the high season for tourism is here, Mrs Wannaprapa said.

The visit would serve to make Phuket’s attractions better known to Indonesians and stimulate the inbound market from that country, she said.

The tourists would spend two million baht on the island, she estimated.

No fewer than five cruise ships arrive in Phuket every month, each generating at least one million baht in tourism revenue.

Most of the tourists are from Singapore, Malaysia and Indonesia, she said.

Current hotel booking rates in Patong are 90%, compared to 70% in Phuket Town. Full occupancy is expected over the holiday period in December, she said.

Hotel reservation rates island-wide are currently about 80% for the Chinese New Year period in early February, she said.

In a related development, Indonesia AirAsia will launch a new route connecting Darwin, Australia and Bali, Indonesia on December 23.

The service will provide travelers with same-day connections to popular Asian destinations including Phuket and Bangkok, the industry website AviationRecord.com reported.