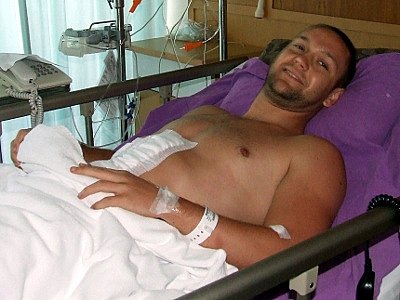 Hamed Poonyung, 23, has been charged with attempted murder for allegedly stabbing 22-year-old Nicholas Palmer in October, 2011.

The attack, which took place on a crowded beach at Ton Sai Bay, occurred at about 1am. Mr Palmer was rushed by speedboat to Phuket, where he underwent emergency surgery to repair a three-inch laceration to his liver.

A hotel employee at the time of the attack, Mr Hamed was arrested by Phi Phi Police shortly after the incident and later charged with attempted murder.

Mr Hamed made his first appearance before Krabi Provincial Court on January 16. His next hearing is scheduled for February 20.

As all witnesses have been questioned by the court, Mr Palmer was free to leave Thailand, he said.

“It now depends on how Mr Hamed pleads. If he denies the charges, further questioning of witnesses will be required. If he confesses, the court can move to sentencing,” he said.

“There are witness statements and CCTV evidence of the crime, so the case is quite clear. We are following progress closely as it involves tourist safety issues, which the courts take into consideration when deciding on punishment,” he added.

Phuket weather radar out of service