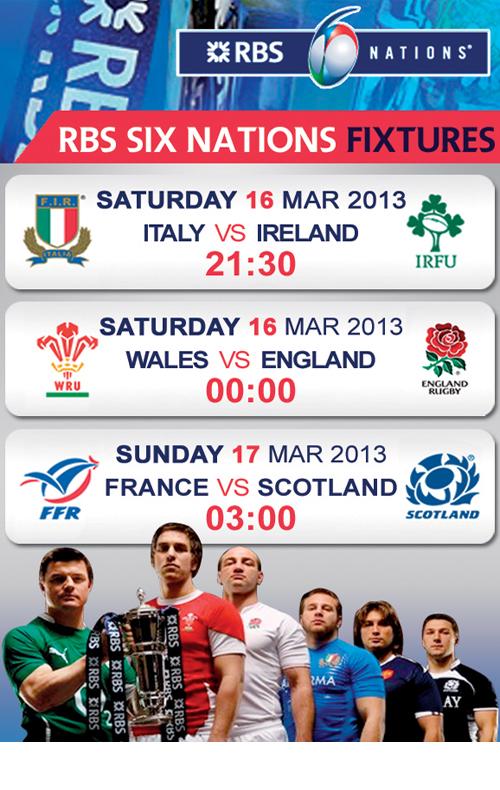 PHUKET: Flyhalf Owen Farrell has been passed fit to return to England’s lineup for Saturday’s Six Nations title decider against Wales in Cardiff, and is likely to start despite Toby Flood kicking six out of six penalties in Sunday’s 18-11 victory over Italy.

The news was not so good for number eight Ben Morgan, who has lost his fitness battle after missing the last three games with an ankle injury.

Coach Stuart Lancaster said on Monday that Farrell was available for selection and that he was also hopeful that locks Geoff Parling, Joe Launchbury and Courtney Lawes would all recover from minor knocks for the Millennium Stadium decider.

Farrell missed Sunday’s game with a thigh strain and though Flood proved an able deputy, Farrell’s ice-cool temperament makes him ideally suited for what is certain to be a high-octane encounter.

Wales will retain their title if they win by at least eight points, or seven points as long as England do not outscore them by three tries. A seven-point Welsh win combined with a two-try swing in England’s favor would see the championship shared.

A narrower Welsh victory would give England their second title in three years while an England win would bring them their first grand slam since 2003.

“We’ve got plenty to work on. I don’t have to remind the players that we need to take the opportunities,” Lancaster told Sky Sports News on Monday, having reviewed Sunday’s nervy Twickenham win.

“We got to 15-3 and should have pulled away. We have to learn the lessons from that but our character at the end was positive.”

While many of the Welsh side have experienced grand slam deciders and a World Cup semi-final, many of England’s have not even played at the Millennium Stadium.

Lancaster, however, did not feel the difference would play a part.

“We’ve still got a pretty inexperienced group but they have confidence and character,” he said.

“I’m confident in all our players. What we need to do is have a good plan and focus our attention on performance. If we get that right we know we are a very difficult team to beat.

“A lot of our players haven’t played there before, so going to that type of environment is exactly the test we want.

“For a team to get that type of experience now and go up there and try to win a grand slam will be a special occasion.”

Loose forward Jones underwent a scan on Monday, after leaving the field in obvious pain during the match at Murrayfield on Saturday, and his arm was in a sling as the team boarded their flight from Edinburgh.

“Ryan is not going to be available,” Wales assistant coach Robin McBryde told reporters on Tuesday. “He has broken a bone in his shoulder. It looks as though he will be out for six to eight weeks.”

Jones confirmed the bad news on his twitter feed.

“So, so disappointed not to be involved Saturday but thanks for all your messages,” he said.

Sam Warburton, captain of the grand slam side, is the obvious candidate to take over from Jones after winning the man-of-the-match award against Scotland. British and Irish Lions lock Alun Wyn Jones, who has returned to the side after injury, is another possibility.

Warburton missed the second round win against France through injury and started on the bench in the subsequent victory over Italy. McBryde said a decision about the captaincy would be made on Thursday.

Wales could select two specialist opensides with Justin Tipuric partnering Warburton. Tipuric started against Italy ahead of Warburton and took over from Jones at blindside flanker against Scotland.

“I thought Sam and Justin worked very well together in Scotland,” said Wales defense coach Shaun Edwards. “Sam got a couple of turnovers after Tips had done the chop tackle beforehand.

“They worked in combination and that is what you need your back row to do, one will chop and the other get on the ball.”

McBryde said Aaron Shingler or Andrew Coombes were other options on the blindside.

Lions loosehead prop Gethin Jenkins, who missed the trip to Edinburgh with a calf strain, has returned to training and will contest the starting position with Paul James.

Scotland lock Richie Gray, a leading candidate for the Lions tour of Australia this year, will miss the trip to France for the final weekend of the championship after tearing a hamstring against Wales.

Gray was stretchered off the field and Scotland doctor James Robson said he would be out of action for eight weeks.

Ireland flyhalf Jonathan Sexton and wing Craig Gilroy have been passed fit to play in Saturday’s other match against Italy but both centers Brian O’Driscoll and Luke Marshall are doubtful because of concussions sustained against France last weekend.

Scrumhalf Eoin Reddan has undergone surgery after breaking a leg in the France match and right wing Fergus McFadden will be out of action for at least three weeks after fracturing a rib.

Ireland, who started the tournament by beating Wales in Cardiff before suffering two losses and a draw, have had 15 players either injured or suspended over the course of their campaign.