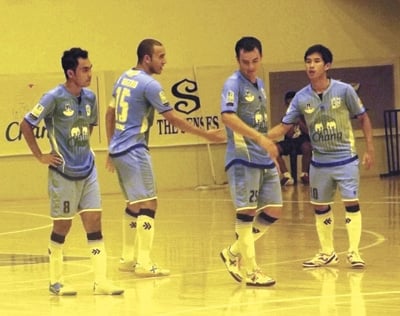 Marking the Andaman Pearl’s home debut in the elite TFPL, the match opened with both sides enjoying equal attacking pressure.

It was the visitors who broke the ice, three-quarters of the way into the first half, with Nawin Rattana-wongsawat scoring on the 15th minute.

Capitalizing on the Bangkok momentum, Thawit Kingkaeo doubled his side’s lead a minute later, while Pratchaya Srimanta increased the visitor’s lead further two minutes after that.

Stunned, the Andaman Pearl regrouped and in the final minute of the half, Brazilian import Jackson Santos made good use of an assist from his comrade Rogerio Moreira to put Phuket on the board with a beautiful strike from the left wing.

Down 1-3, Phuket came out of the locker room ever-determined to level the score.

Cheering from the vocal crowd intensified as Phuket increased the pressure.

Bangkok’s defences were tight, and their keeper Katawut maintained good positioning for the most part.

Phuket finally got their deserved break on the 33rd minute with a long shot by Nattapong Buachai, bringing the score 2-3 and much of the crowd rose to their feet.

Bangkok found themselves in trouble with the referee, having reached their five foul limit. Had they fouled again, Phuket would have had a penalty kick – but that never happened.

With the clock winding down, Phuket employed a strategic ‘power play’ formation, bringing their keeper out of the net to help on the attack.

However, the tactic proved to work in favor of the visitors, who managed to capitalize on the vulnerable Phuket defence to score two consecutive goals by Phubet Kongthong and Warut Wung Sammma-al on counter attacks.

With the score 5-2 to the visitors, Phuket pushed on, and Moreira scored from the right wing in the final seconds of the match to bring the final score 3-5.

Speaking to the Phuket Gazette after the match, Bangkok coach Wisaan Maiwichit said: “It was a fun game. As the away-team, we had to be patient and bear with the pressure… Phuket fans were quite vocal. The fans have a part and can affect the result, but I’m satisfied with how my team kept with it to win…”

Phuket Head Coach Suphol Sena-peng was regretful: “In the second half, we had many chances to come back, especially when the score was 3-2, and we had momentum. However, we couldn’t finish, and a few mistakes in the end cost us this game.”

Phuket’s next match is an away fixture to be played on December 8 against Surat Thani.