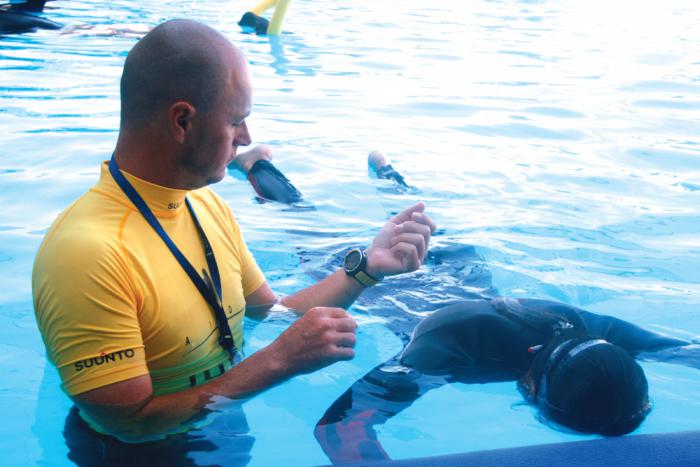 PHUKET: The We Freedive Suunto Series saw contestants holding their breath last Sunday at Phuket Country Home in Chalong as they faced off to gain international points and improve their ranking for the Association Internationale pour le Developement de l’Apnee (AIDA).

Five competitors participated in the static apnea, one of the eight AIDA freediving disciplines.

In static apnea, “the freediver holds his breath for as long as possible with his respiratory tracts immersed, his body either in the water or at the surface. Static apnea is the only discipline measuring the duration, and one of the three disciplines considered for the international competitions,” explains AIDA’s website.

There were three red cards issued during the competition disqualifying Katrin Felton, Yuan Feng and Stanely Sradaputta. The red cards were issued for surface protocol violations, airways violations or both.

“Katrin did a very, very clean dive and was disqualified for a benign flaw in her surface protocol, which all athletes world wide have to perform the same way,” explained Richard Wonka who judged the competition along with Sarah Whitcher.

“To make it very clear that they are conscious and in control, athletes in AIDA competitions are required to keep their airways above the surface after surfacing,” Mr Wonka said.

Mr Wonka emphasized that his and Ms Whitcher’s roles as AIDA International judges is to ensure that athletes in freediving competitions finish their dives in a healthy and controlled state.

The final prize at the end of the series is a white Suunto D6i dive computer, which is awarded to the athlete with the cleanest record (least number of red cards and yellow cards).

“So we are looking for people who perform well and collect white cards, no blackouts and no penalties – nice and clean dives,” Mr Wonka said.

The next competition is expected to take place at Phuket Country Home in Chalong on the last Sunday of the month. However, the date has yet to be confirmed.