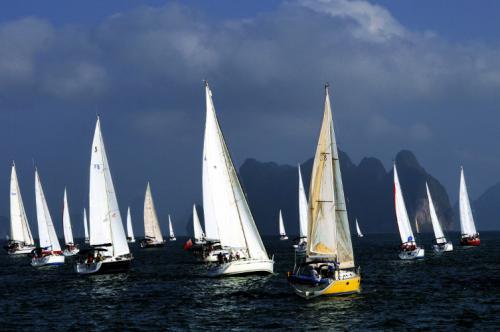 PHUKET: With this year’s Bay Regatta set to kick-off this Wednesday and run through to Saturday, the entry list is growing daily with over 32 yachts currently entered, many joining the event for the first time.

The Racing Class will be headed by the largest monohull yacht on the course – first time entrant, X-Yacht X-55 Pine Pacific – helmed by Ichinai Yingsiri from Thailand. He will be closely chased by Denis Logutenko’s First 40, Russian entry No Applause and another Russian entry, Andrey Arbuzov’s chartered Young 11, Ruby Tuesday.

Cruising Yachts are divided into two divisions, Cruising A will see the renewed rivalry between two past champions, Niels Degenkolw of Denmark in the 3/4 tonner Phoenix and Jim Ellis of Canada on his S&S Galatea Remington. They will be challenged by recent Langkawi Regatta class winner Elena, helmed by Somov Vaycheslav of Russia and a fleet of potential dragon slayers waiting to take the 2014 title.

Cruising B, sees the return of many regular’s including Bill Crump’s Tayana 55 Fistral, Gavin Welman’s Halberg Rassey 53 Rascal and Kevan and Sheila Perrins on their Oyster 435 Rusalka, who will all be racing under the new NHC performance handicap system which was recently debuted at the Langkawi International Regatta.

The Multihull Class, sees the Asian debut of Adrenaline, recently called “one of the most interesting trimarans ever built”, this record breaking Formula 40 Trimaran is now based in Phuket and sailed by a veteran team from Ao Chalong Yacht Club. They will be closely chased by a fleet of competitive catamarans including last years runners up – Peter Wilcox’s Mojo, Phuket based multihull designer Alan Carwadine on Hurricane and the ever present Henry Kaye on his Seacart 26 Turbo Sweet Chariot.

Now in its 17th year, often billed “Asia’s fun regatta”, the hallmark of this event is a casual, fun-filled atmosphere. Many families and friends join together to sail the four-day event and while the sailing is serious for many racing class yachts, a large number of cruisers join for the experience of sailing through some of the world’s most amazing maritime scenery.

Following its course through the provinces of Phuket, Phang Nga and Krabi, this year’s regatta returns to Phi Phi Island. Once, the regular venue for the Phuket King’s Cup Regatta, this will be the first time a regatta has returned to Tonsai Bay since 2001.

Speaking about the return to Phi Phi, Race Director of The Bay Regatta Simon James said, “For 14 years, Tonsai Bay was a traditional stop-over for the Phuket King’s Cup Regatta with photographs of the exciting starts between the two Phi-Phi Islands being seen throughout the world. Every year I’m asked ‘when can we go back?’.”

“The anchorage is now busier with many day trip boats and ferries now gracing the once deserted anchorage, but we are delighted that Khun Lek from Arayaburi Boutique Resort has invited us back and many sailors cannot wait to return to see their old friends in Tonsai Bay,” he added.

With four days of racing and five days of partying, the regatta crosses the three provinces of Phuket, Phang Nga and Krabi, is surely one of the most scenic regattas on the Asian racing calendar and always lives up to its reputation as the fun regatta.