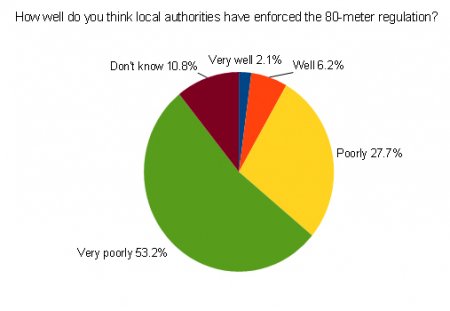 PHUKET: Local authorities in Phuket have done a woeful job enforcing the ban on construction at sites above 80 meters, an overwhelming majority of Phuket Gazette readers think.

In the last online poll, readers were asked:

In an effort to reduce landslides, flooding and deforestation, the government in 1996 imposed a ban on the construction of all permanent structures above 80 meters in Phuket. How well do you think local authorities have enforced this regulation?

Just over 10% of respondents, mostly tourists, chose the “I don’t know” option.

There was little variation by demographic, though participants identifying themselves as local foreign residents were the most likely to answer in the negative. Over two-thirds (67%) of these thought the enforcement effort had been conducted “very poorly”.