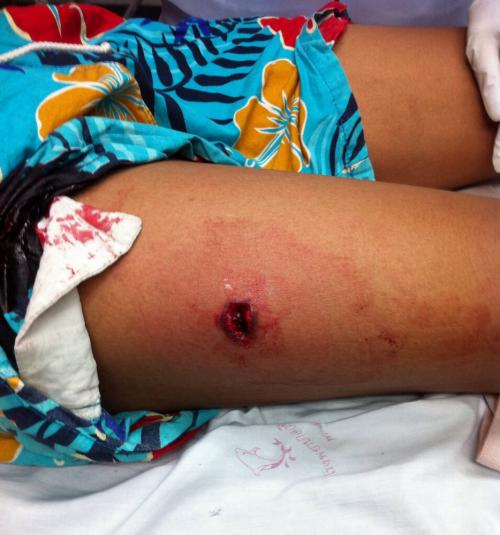 PHUKET: Police are searching for the gang responsible for a drive-by shooting that left a man in Rassada injured last night.

Anupol Noochua, 31, was shot in the leg in front of his house at about 10pm.

Mr Anupol told police that at about 7pm last night, while he was sitting outside drinking with friends, a young woman rode by on a motorbike.

“He said he teased her when she rode past,” said Wetchasak Jul-adung of the Phuket City Police.

“A short while later, a man in his early twenties rode by and swore at Mr Anupol and his friends,” said Lt Wetchasak.

Mr Anupol’s group ignored him and continued drinking until about 10pm, when the man returned with four friends, all on motorbikes.

“One of them pulled out a gun and shot Mr Anupol in the thigh. After that, they sped off,” Lt Wetchasak said.

By the time police arrived at the scene, Mr Anupol had already been taken to Vachira Phuket Hospital, where he underwent surgery to remove the bullet.

“We are searching for the men. We believe the shooting might have been motivated by the teasing,” said Lt Wetchasak.