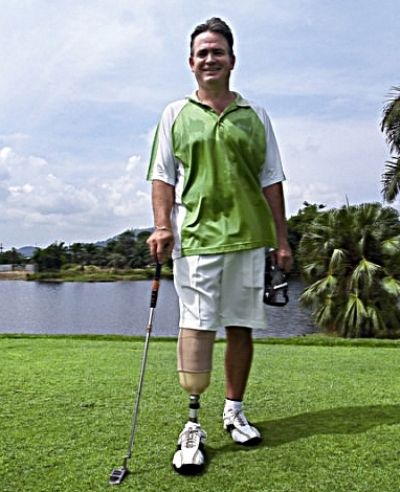 PHUKET: Cathay Pacific airline pilot Scott McDonald  is back on the golf course – and playing better than ever.

Mr McDonald, whose right foot and lower leg were sliced off in a freak motorcycle accident two months ago, had a new prosthetic foot fitted on March 14.

The American has already played six rounds of his favorite sport at the Blue Canyon and Loch Palm courses, amazing friends with the speed with which his skills have returned.

“I’m playing almost better than I was before,” he said. “I’m certainly more consistent.”

Scott, whose handicap is 17, took up golf around two and a half years ago, on Phuket.

Bangkok Phuket Hospital’s Swedish prosthetics specialist Dr Bengt Soderberg fitted Scott with his new foot, which has been designed to ensure he can resume his career as an airline pilot.

“My employers continue to be really supportive,” he said.

In about two months, time Scott will fly to Hong Kong where he will try out Cathay Pacific’s simulator for the first time since the accident. If things go well, he should be back in the air “within a few months”.

Scott is also close to an informal agreement with the young Thai man who hit him in the accident, which happened on Thepkrasattri Road on January 24. While the details have not been finalized, it is likely there will not be legal action taken by either party.

For more on the life-changing work of Dr Bengt, see pages 4 and 5 of the of the current issue of the Phuket Gazette. [Digital subscribers click here.]

Phuket to benefit from a better 2010?