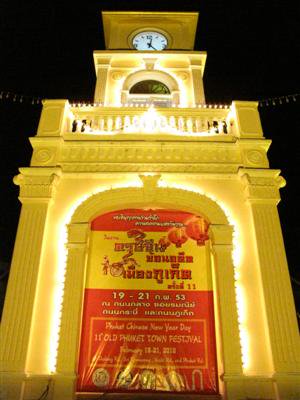 This year’s Phuket Old Town Festival will take place from February 19 to 21, after the arrival of the Year of the Tiger that falls on Valentine’s Day.

The Tourism Authority of Thailand and Phuket City Municipality are promising more activities than ever during the event, now in its 11th year.

Organizers chose the serene courtyard of Saeng Tham Shrine on Phang Nga Road as the launch site for this year’s festival.

Centered on Queen Sirikit Park and spreading over the Old Town streets of Thalang Road, Phuket Road, Krabi Road and Soi Rommannee, this year’s event will feature performances by entertainers from no fewer than 10 different Chinese provinces.

“This year the Peranakan Association of Phuket will invite those in other Southeast Asian countries, such as Singapore and Malaysia, to come and perform. There will be an extra stage on Thepkrasattri Road and an exhibition presenting Phuket Peranakan origins and culture,” she said.

Peranakan, as well as ‘Straits Chinese’ and ‘Baba-Nyonya’, are terms used to refer to descendants of ethnic Chinese who emigrated to Southeast Asia during the colonial period.

Setting off at 1pm from Queen Sirikit Park, the buses will take festival-goers on a tour of five of the town’s Chinese shrines. The cost will be 50 baht per passenger.

Bang Niow Shrine will be the first stop. The pinkies will then move on to Saphan Hin Shrine, Kuan Im Shrine and then Jui Tui Shrine “to worship the tiger god, as next year is the year of the tiger,” Ms Wanaphapar said.

The buses will then move on to Saeng Tham Shrine before returning to the park at 6pm.

Activities on the first night of the event are set to include a ceremony of worship of the bodhisattva Kuan Im, whose statue stands in Queen Sirikit park, as well as a cultural exhibition at 63 Thalang Road, rickshaw tours of Phuket Town, and boat trips along local canals.

The second night will see colorful processions of Phuketians dressed in traditional costumes parading from Saphan Hin back to the festival.

The last night of the festival will feature a Hokkien god-worship ceremony, with Chinese monks praying for prosperity and protection for Phuket.

The Phuket Post Office will provide a mobile stamp-printing service that will allow people to have their photograph printed on postage stamps that can then be mailed.

“We would like to invite all Phuket locals and tourists to join in the festival because it is only held once a year,” Ms Wanaphapar said. “It is a festival that shows off the beautiful traditions and cultures of Phuket that are not often seen.”