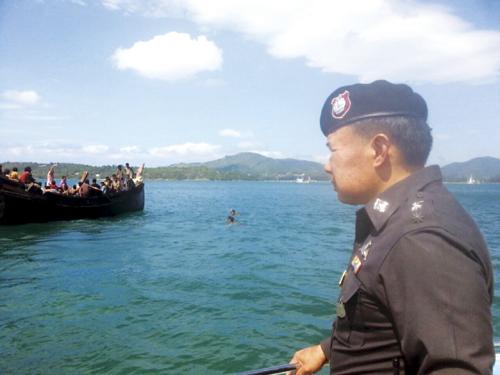 PHUKET: The Rohingya refugees rescued off of Phuket on January 1 reportedly requested to be sent back to Myanmar, according to Phuket Governor Maitri Inthusut.

Since Thai authorities systematically deny access to detained Rohingya for humanitarians, NGOs and journalists, it’s impossible to actually know what the Rohingya told the officials, but you can bet they were not given much choice in the matter.

What the Governor left unsaid was that the Thai government blatantly discriminates against the Rohingya by denying them the right to seek asylum and refugee status, and keeps UNHCR [United Nations High Commissioner for Refugees] representatives away from them.

He also forgot to mention that the National Security Council has as a matter of policy categorized the Rohingya as a threat to Thailand’s security – although you can see in the destitute and desperate manner they reached Thailand’s shores that they are hardly a threat to anyone.

Now this group was sent to Ranong for a so-called “soft deportation”, meaning that they will be handed over to profit-seeking people smugglers who will exact very high fees from the Rohingya to move them to Malaysia, or failing that, will force them into labor to pay the fees – essentially a situation of human trafficking.

The so-called “help on” policy of Thailand then becomes a de facto “help out the smugglers” policy when Rohingya reach land, in some cases seriously compounding the human rights abuses against these desperate people.

Thailand should accept these Rohingya, give them access to UNHCR for refugee status determination, and provide them with assistance – just as Malaysia has recently done with Rohingya arriving by boat in that country. Thailand needs to stop its illegitimate “beggar thy neighbor” policy of pushing the Rohingya problem south to other countries and recognize that Thailand’s international human rights obligations require a better response than this.

Phil Robertson is the Asia Deputy Director for the international human rights organization Human Rights Watch, based in New York.

Swiss tourist dies after being pulled from Phuket waters