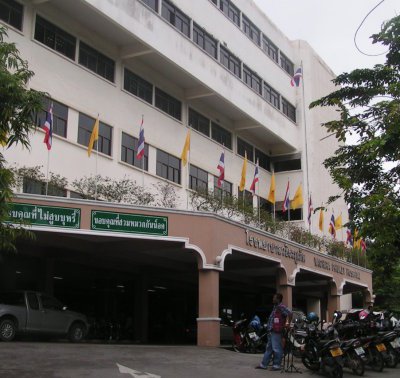 PHUKET: Refuting allegations of any medical misconduct concerning the treatment of Liberty Jefferson, following a serious motorbike accident in March, Vachira Phuket Hospital on Friday issued a statement to explain where their responsibility for her care started and ended.

Reported by KVAL news in Ms Jefferson’s home state of Oregon, USA, “Miss Jefferson says she sat in a hospital room 13 hours before she received any help. In all she spent 9 days in the government hospital.”

The report also stated that “The doctors in Thailand botched the 2 operations” to Ms Jefferson’s broken leg.

Methavee Maneesri of Vachira Hospital’s International Department, however, clarified to the Phuket Gazette that Ms Jefferson had not been at their facility for nine days, as claimed.

“The accident happened at about 2:30am on March 16 and she was admitted at 3:30am with a swollen and deformed right lower leg. She stayed with us only one day and 10 hours,” Nurse Methavee said.

“We put on a device to support her leg and gave her saline solution [intravenous drip]. We placed her on a ‘nil by mouth’ regime in preparation for surgery, which was planned for a few hours later.

“The emergency surgery to repair her broken bones was delayed because she refused the surgery and requested to be transferred to a private hospital,” she added.

Ms Methavee said that a friend of Ms Jefferson contacted private hospitals on the island. However, the deposits required before medical treatment at those facilities could begin exceeded the Ms Jefferson’s insurance coverage.

Having delayed the operation until the afternoon of the following day, doctors at Vachira Hospital were afraid that infection could set in and persuaded Ms Jefferson to undergo surgery at 2:30pm, 12 hours after the accident.

“That operation, involving debridement and external fixation of an open bone fracture, was purely an emergency measure to prevent the injury worsening and to prevent infection.

“The next day [March 17] she was transferred to Mission Hospital, where she remained for nine days,” said Ms Methavee.