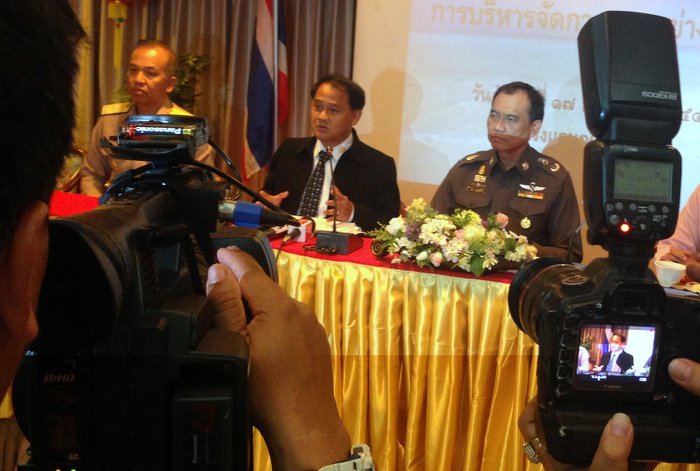 “Today, I would like to make it clear. We will continue to strictly enforce the rules prohibiting beach chairs on Phuket sands,” Governor Nisit said.

The governor’s statement flies in the face of Patong Mayor Chalermluck Kebsup’s call yesterday for a compromise following several incidents on Patong Beach this week during which tourists became outraged after police asked them to remove their sun loungers from the sands in compliance with the no-chair policy (story here).

The issue went viral earlier this week with videos and pictures circulating on social media sites capturing groups of tourists becoming upset when asked to remove their sun loungers from the beach – some even recording tourists vowing never to return to Phuket if chairs remain banned.

“This is about changing the behavior of both beach vendors and tourists who have gotten used to occupying the beaches with sun loungers over the last 30 years,” Gov Nisit said at the meeting, where he was joined by Navy Region 3 Deputy Commander Narudol Pancharien, Provincial Police Commander Patchara Boonyasit, Vice Governor Somkiet Sangkaosuttirak and Vice Governor Suthee Thongyam.

Towels and mats are still allowed anywhere on the beach.

“Signs in Thai, English, Chinese and Russian with images making it clear that chairs will not be allowed on the beaches will be posted,” Gov Nisit said.

The governor confirmed that the 10-per-cent arrangement is in a 3-month trial period, after which it will be signed into law.

“It is time to move forward. We can’t do it alone. We all must work together,” Gov Nisit said.