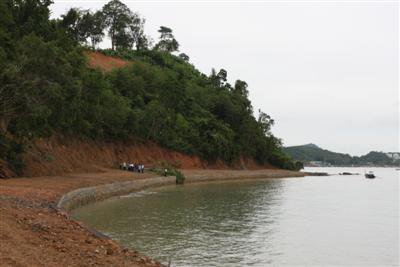 PA KHLOK, PHUKET: Resort developers have converted a section of seaside jungle into a 200-meter-long quay at Ao Por without official permission, it has emerged.

The developers used heavy machinery to uproot trees and remove earth from the hillside to create an artificial quay in Tambon Pa Khlok, near village 6.

Although the work began at the start of 2008, it has somehow only now come to the attention of authorities.

However, the scale of the project and the length of time it remained “undetected” suggest it may have been carried out with the collusion of local officers.

Phuket Governor Wichai Phraisa-ngop is now investigating the matter after receiving a complaint from local villagers at the Damrongtham Center at Phuket Provincial Hall, which serves as the provincial ombudsman’s office.

The complaint accused Pa Khlok Tambon Administration Organization (Pa Khlok TAO) officers of colluding with the resort developers to allow the construction of the quay without proper permission.

The developers should have obtained permission from Pa Khlok TAO, the Marine Transport Office, the Thalang Land Office and Thalang Police in order to carry out the work.

The development is listed in a government report as the future site of the Penkiri Resort and Spa, though the name of the development firm behind the project has not been disclosed.

Pa Khlok TAO President Athipong Kong-nam told the Gazette, “They didn’t ask for permission to do this from Pa Khlok Municipality but we can’t blame the landowner until we talk and see their documents. The municipality will follow and investigate the issue.”

Gov Wichai visited the site yesterday, following a visit by Phuket Vice-Governor Smith Palawatwichai on May 29.

“The area isn’t hidden. I don’t know why government officers didn’t know about this. We have to investigate those officers and the land owner,” Gov Wichai said.

The governor has set up a special committee to investigate the officers responsible and report back to him within seven days.

The governor said his office had yet to determine who the land owner was and whether they possessed title deeds for the area in question.

“Phuket has a lot of problems with encroachment, both on land and sea. This week I flew on an inspection tour around the island with officers from relevant agencies. We can’t let this sort of thing happen anymore,” said Gov Wichai, who has a great deal of experience in land dispute issues.

Around 30 local village leaders from Pa Khlok were scheduled to meet Gov Wichai to discuss the issue at Phuket Provincial Hall at 3pm today.