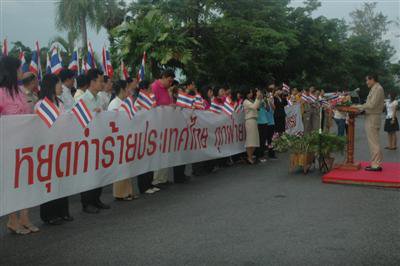 PHUKET CITY: With Phuket gearing up to host the Asean+3+6 summits in mid-June, Phuket Governor Wichai Phraisa-ngop on Monday led a group of about 200 flag-waving people in a “Stop harming the Country” campaign at Phuket Provincial Hall.

Participants at the event swore an oath and called on all parties involved in the current conflict to refrain from resorting to physical or verbal violence and maintain respect for the law as well as the rights of others.

As part of the activities, Gov Wichai read from a statement issued by the Thai Journalists Association to mark the United Nation’s World Press Freedom Day on May 3.

In addition to demanding that media be allowed to work free from government interference, the statement also called on all parts of Thai society – including the media – to stop speaking and writing in ways detrimental to the country.

“Holding different political views is ordinary in any democratic society, but we must not resort to violence to achieve our political objectives,” he said.

While confirming the public’s constitutional right to assemble, Gov Wichai said political rallies had to be peaceful and free of weapons.

Rally leaders should respect the rights of other people and people should not use economic incentives to get others to participate in rallies, he added.

“I am begging political leaders, politicians, members of parliament and all other people involved in the conflict to stop inciting Thai people to hate one another just to achieve their own political objectives,” said Gov Wichai.

Resorting to undemocratic means would bring ruin to the country, he added.

Governor Wichai also pleaded with all political factions to stop involving HM The King in political debates, as the role of the Royal Family is above politics.

State authorities must use a single standard in order to maintain peace and order in the country, treating all citizens equally under the law, he said.

Calling on government officials to uphold the Constitution, Gov Wichai said they must work in a transparent fashion and remain accountable to the public, answerable to any questions they might have.

Similar events, organized by a number of civic organizations, were held across the country the same day.