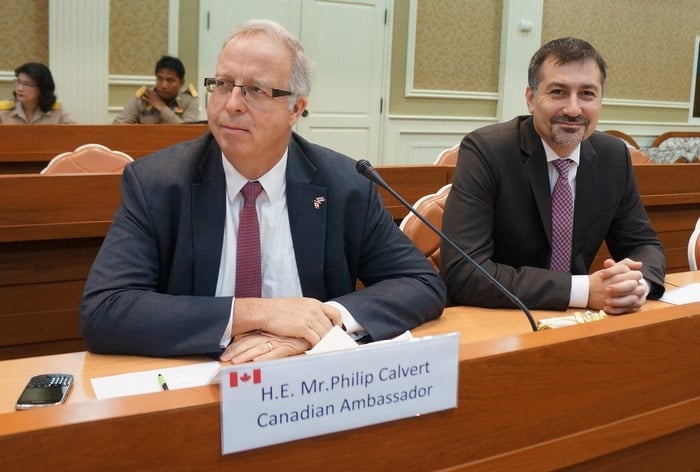 PHUKET: Phuket Governor Chamroen Tipayapongtada sat down with ambassadors from five countries today to review a number of issues affecting citizens from their nations.

The ambassadors in attendance were from Canada, Germany, Ireland, the Netherlands and the United Kingdom. Some of the major issues raised included marine and road safety, prison conditions, drug use and visa overstays.

“After discussing a number of concerns with regards to the tourism industry and other issues faced by the province, I and relevant authorities outlined what is being done to address these problems to create a better image for Phuket,” said Governor Chamroen, after an hour-long closed-door meeting.

All the ambassadors the Phuket Gazette spoke with following the meeting were positive about the outcome.

“It was a good atmosphere,” said Philip Calvert, Canada’s ambassador to Thailand.

“We discussed a whole range of issues that were put on the table. Tourists’ safety is a big issue for all of us, and of course we want our own tourists to respect Thai laws.”

“We want to see our tourists wearing helmets, but sometimes we want to see stricter enforcement of these laws. We make it clear that we expect our people to obey Thai laws and respect Thai society, but we need the help of Thai authorities to make sure they do that and are protected.”

Amb Calvert explained that the group discussed what could be done to increase Phuket’s attractiveness as a tourist destination as well.

“That’s something we want to work on together,” he added.

British Ambassador to Thailand Mark Kent noted after the meeting that Phuket officials had made progress in addressing some of the issues affecting the island.

“First of all, we support the governor in his efforts to make Phuket one of most attractive tourism destinations in the world. When the European Union ambassadors came here two years ago, they identified a number of points which were challenging for Phuket,” Amb Kent told the Gazette.

“Since then, we believe there has been some progress made on these. There is still work to do, but the governor has focused his attention on all the issues.”

Gov Chamroen confirmed to the Gazette that the ideas and suggestions put forward by the ambassadors were going to be taken on board.

“Phuket is not only for Thailand – it is a city of the world for tourists from all lands. I am thankful for the ambassadors’ comments and will do my best to tackle those issues that are troubling Phuket,” Gov Chamroen said.

“There are some problems that have been prevalent for a long time, but that doesn’t mean we can’t solve them. We are doing our best to make Phuket a truly world-class tourist destination.”