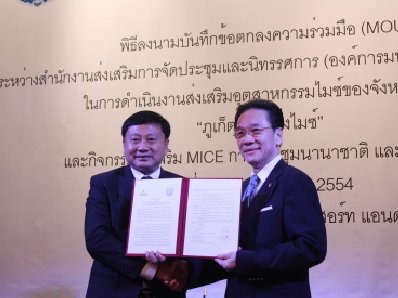 Phuket Governor Tri Augkaradacha and Anusak Inthraphuvasak, Chairman of the Board of the TCEB, signed the Memorandum of Understanding (MoU) this afternoon at the Westin Siray Bay Resort & Spa in Phuket to initiate the “Phuket MICE City” project, which aims to develop the province as a hub for meetings, incentive tourism and regional trade shows.

Speaking at the event, TCEB Honorary Adviser Seven Smulders pointed out that developments are well underway for a convention and exhibition center in Mai Khao. Construction on the center, which was approved by the cabinet in October last year, is expected to be complete in 2015, Mr Smulders said.

Further highlighting Phuket’s potential as a MICE destination was TCEB Director of Exhibitions Supawan Teerarat. She explained that Bangkok is currently Thailand’s center for MICE activity, but that with the upcoming expansion of Phuket International Airport to handle more than 11 million passengers per year, along with other infrastructure development plans and the availability of accommodation and health-care, Phuket is well positioned to become a MICE center in Asia.

According to the MoU, Phuket province and the TCEB will “exchange information for planning purposes, including construction of infrastructure, transportation and mass transit in Phuket in order to enhance Phuket’s competitiveness as a global MICE destination”.

The partnership will also work together in publicizing and “enhancing” Phuket’s potential and competitiveness in the MICE industry.

Andy Dowden, general manager of Informa Yacht Group Thailand and organizer of the PIMEX International Boat Show, pointed to the success of his event as evidence of Phuket’s potential.

PIMEX, which recently wrapped up its eighth annual event in Phuket, is the largest boat show in Thailand, Mr Dowden said. This year’s event saw 90 companies representing 40 brands, 47 boats and an estimated 5,000 visitors attend, he said.

He said that for the past four years, the TCEB has been providing assistance with organizing the boat show and that co-operation with the TCEB was “simple and painless”. And he praised their financial assistance and help with publicizing the event both throughout Thailand and overseas.