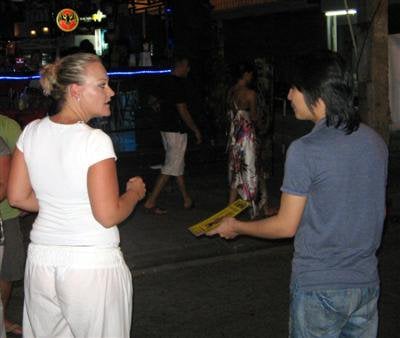 PHUKET: Kathu Police are setting up a new center aimed at cracking down on unregistered ‘ghost guides’ operating in Patong, the local police chief says.

Kathu Police Superintendent Arayaphan Pukbuakhao told the Gazette that the new center, to be based in the police box on the beach at the foot of Soi Bangla, is scheduled to open in about one week.

The Bangla Police Box was chosen as tour buses organized by up to 50 different tour companies stop in front of it to let passengers alight and explore the nightlife of Soi Bangla, a walking street blocked to vehicular traffic from 6pm daily.

Work is already underway to create a database of registered tour guides and the companies they work for, Col Arayaphan said.

The majority of guides were from tour companies catering to groups from China and Korea, he said.

Creating a database will help police to identify unlicensed guides working in the area, he said.

“We know most of them. If any unfamiliar ones appear we will ask to see their licenses. We will fine anyone caught working illegally according to regulations,” he said.

Currently about seven or eight officers rotate shifts at the Bangla Police Box.

Kathu Police plan to assign one permanent head to take charge of operations at the box in order to provide better security in the area, he said.

According to one local media report, the initiative was also geared toward ridding the area of street touts who get a commission for bringing foreign tourists into establishments that advertise a variety of entertainments, including sex shows.

Hundreds of such guides line the streets of Soi Bangla every night, using laminated plastic ‘menus’ that provide descriptions of the entertainments on offer. These, too, feature sex.

When asked about this, Col Arayaphan said the effort was directed more at unlicensed guides leading large groups of foreign tourists who arrive by coach.

The issue of tour guides has long been a contentious one in Phuket.

Thai law reserves the profession for Thai nationals, but many tour companies are known to employ expats to lead foreign tour groups.

However, anyone caught leading a group tour in Patong is subject to a license check, Col Arayaphan emphasized.