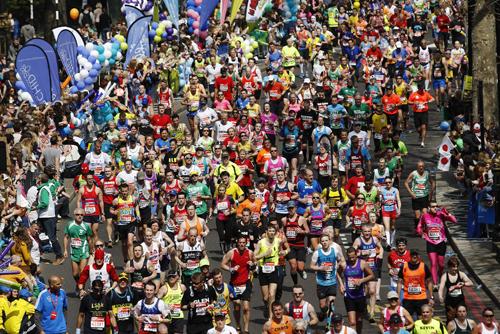 PHUKET: Undaunted by the Boston Marathon bombings, big crowds lined the route of London’s mass road race to cheer on around 36,000 runners, many of whom wore black ribbons to remember the dead and wounded.

Hundreds of extra police were deployed to secure the first race in the World Marathon Majors since two explosions near the finish line of the Boston Marathon on Monday killed three people and wounded 176.

“It is a bit different this year because everybody’s aware of what happened in Boston … They’re not going to stop us running,” said Steve Williamson, a three-time competitor in the London Marathon now taking part as a marshall.

“It was incredible, the amount of support, people coming out from everywhere, just cheering the whole way. Unbelievable,” said a breathless Mo Farah, Britain’s 5,000 and 10,000-metre Olympic champion, after running the first half of the course.

Farah ran half the route to prepare for competing next year.

London’s Metropolitan Police Service said it increased the number of officers on the streets to reassure the public and not in response to any specific threat.

The enhanced security did not dampen the party atmosphere, with marathon regulars saying the turnout was bigger than in previous years and a brass band near the starting line jokingly complaining the cheering crowds were drowning out their music.

Before the start of the men’s elite and mass races, official commentator Geoff Wightman led the crowd in a tribute to Boston.

“This week the world marathon family was shocked and saddened by the events at the Boston Marathon,” he said over loudspeakers.

“In a few moments a whistle will sound and we will join together in silence to remember our friends and colleagues for whom a day of joy turned into a day of sadness.”

The packed ranks of competitors bowed their heads and stood silently for 30 seconds, then clapped and cheered when a second whistle marked the end of the tribute.

Seconds later, the world’s elite runners led off the race. Behind them came thousands of competitors chasing personal goals or raising money for charity, many running in fancy dress.

After an unusually long and harsh winter, the weather came through for the London Marathon which unfolded under bright sunshine and a cloudless sky, a bonus for the competitors and for the hundreds of thousands of spectators cheering them on.

The 26-mile course starts in leafy Greenwich, crosses Tower Bridge, snakes through the Canary Wharf business district before going through the heart of London, past Big Ben to Buckingham Palace.

Police with sniffer dogs were out in force and bins had been removed from the length of the course as part of a security boost.

“The enhancement to policing, which will see several hundred additional officers on the streets, is intended to provide visible reassurance to the participants and spectators alike,” the Metropolitan Police said on its website.

There was a 40 percent increase in officers on the street compared with what was planned before the Boston bombings.

The organisers will donate 2 pounds per finisher to The One Fund Boston, set up to raise money for the victims. They estimate around 35,500 people will cross the line, meaning they are likely to raise at least 70,000 pounds.

In the German city of Hamburg, which was staging its own marathon, runners also wore ribbons and held a minute of silence for victims of the Boston bombings.

PHUKET: Liverpool’s Luis Suarez sunk his teeth into Chelsea’s top-four hopes with a last-gasp equaliser yesterday but it was his bite on an opponent that overshadowed a day when Tottenham Hotspur virtually ended Manchester City’s Premier League title defence.

Suarez clearly clamped his jaw around the arm of Chelsea defender Branislav Ivanovic during the second half of an action-packed Premier League clash but escaped unpunished.

The controversial Uruguayan’s powerful header six minutes into stoppage time then earned his side a 2-2 draw.

It was a bitter blow for Chelsea, especially as Tottenham had earlier closed the gap in the chase for Champions League qualification with a stunning late comeback to beat City 3-1.

Leading 1-0 through Samir Nasri’s early goal with 15 minutes left, City seemed set to prolong the title race for another week at least but three goals in seven minutes late on from Clint Dempsey, Jermain Defoe and Gareth Bale left them 13 points behind leaders Manchester United.

While the title race is virtually done and dusted, Tottenham’s win and Chelsea’s draw at Liverpool intensified an intriguing top-four battle that could go to the wire.

While Liverpool manager Brendan Rodgers said he would need time to view the Suarez incident again and his counterpart, former Anfield boss Rafa Benitez, said he had not seen the bite, the controversial Suarez will again make the headlines for all the wrong reasons.

The Football Association confirmed that it would begin an investigation into the biting incident on Monday and Graeme Souness, Liverpool’s former hardman midfielder now working as a Sky TV pundit, described it as “embarrassing” and said the reputation of the club was being damaged.

“It could make it very difficult for him to stay at Liverpool,” Souness said.

“They have to safeguard the good name of the club.

“Suarez’s track record is not great, this puts him in the last-chance saloon because it’s putting at risk eveything that this clubs stands for.”

Suarez is no stranger to controversy.

He was once banned for biting an opponent in the Netherlands and last season was banned for racially abusing Manchester United’s Patrice Evra.

Once again he was in the thick of things, creating Liverpool’s equaliser for Daniel Sturridge with a superb cross and then conceding a penalty with a needless handball to allow Eden Hazard to put Chelsea 2-1 ahead.

He then headed in Sturridges’s cross to deny Chelsea who had gone in front before halftime through Oscar.

“It is one point, but when you are winning in the last second, it is incredible to play six minute and 45 seconds of injury time. You do not see that,” said Benitez who was given a rousing reception by the Liverpool fans.

“I have not seen the (biting) incident, the players told me about it. We are not talking about that, we are so disappointed about the late goal.”

Earlier at White Hart Lane, Manchester City manager Roberto Mancini was left mystified as to how his side had lost to Tottenham despite looking comfortable for 75 minutes.

Shrugging off the title race as “being over three weeks ago” he told reporters: “For 80 minutes we didn’t concede a chance and we had two or three chances to score, it was all under control. We lost because of two big mistakes.”

Even his Tottenham counterpart Andre Villas-Boas admitted that defeat had looked the likely outcome.