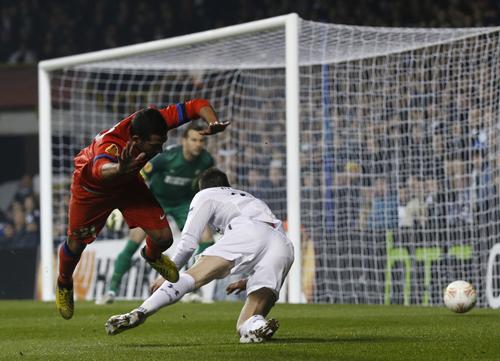 Big-spending Russian pair Zenit St Petersburg and Anzhi Makhachkala failed to manage a goal between them. Zenit lost 2-0 to late goals at FC Basel and Anzhi were held 0-0 by Newcastle United.

Former European champions Benfica beat Girondins Bordeaux 1-0 thanks to an unlucky own goal and Lazio won 2-0 at VfB Stuttgart in other last 16 first leg ties.

Tottenham and Inter were meeting for the first time since the 2010-11 group stage when Inter raced into a 4-0 lead at the San Siro, before a Gareth Bale hat-trick in second half brought it back to 4-3.

Inter, fourth in Serie A, have been spectacularly inconsistent this season and suffered one of their off-nights, shoddy in defence and toothless up front.

Tottenham went ahead after only six minutes when man-of-the-moment Bale scored a rare headed goal, taking his tally to 10 for Spurs in his last eight matches

Icelandic midfielder Gylfi Sigurdsson added the second from close range in the 18th minute after Jermaine Defoe’s shot on the turn was parried by keeper Samir Handanovic.

Bale was booked for diving and will miss the second leg, but Tottenham may not need him after Jan Vertonghen headed a third from a poorly-defended corner early in the second half.

Antonio Cassano, briefly banned by Inter following a furious dressing-room row, was restored to the side but failed to make an impact.

“It was a very good performance and a great night of European football for us. At halftime we thought we could have gone further, they had a couple of chances but we had so many opportunities we played really well and deserved to win,” said Tottenham manager Andre Villas-Boas.

“They are going through their best phase of the season and to conceded two goals at the start of the game penalised my team,” said his opposite number Andrea Stramaccioni.

“We did not want that to happen. Gareth Bale is a great player, but tonight was a great night for their team and Tottenham deserved what they got as a team.”

Chelsea, who ended up in the competition after becoming the first titleholders to be eliminated in the Champions League group stage, are in danger of a second European exit of the season after losing in front of a full house at Bucharest’s National Stadium.

Steaua, European champions in 1986, scored the only goal when Ryan Bertrand was penalised for impeding Rusescu at the far post and the 24-year-old forward stepped up to fire the penalty in the 34th minute.

Despite the setback, Chelsea’s interim manager Rafa Benitez was confident his team will overcome the setback in the second leg.

“In these kind of games and this kind of competition, if you don’t score away it’s always more difficult. Still, you have to believe,” Benitez said.

“We are disappointed, but still we have the belief we will win at home.”

Benfica edged Bordeaux thanks to an unlucky own goal by Cedric Carrasso, Rodrigo’s shot bouncing off the crossbar and hitting the visiting goalkeeper to ricochet into the net.

Lazio overcame Stuttgart with goals in each half from Brazilian Ederson and Nigeria midfielder Ogenyi Onazi, who picked up the ball in his own half, advanced almost unchallenged and chipped the ball over Sven Ulreich.

Goalkeeper Rob Elliot made a brilliant second-half save from Cameroon forward Samuel Eto’o as Newcastle United held out for a dour goalless draw in bitterly cold conditions away to Anzhi.

With the temperature well below zero, Anzhi started brightly but lost momentum after Brazilian playmaker Willian, signed from Shakhtar Donetsk for 35 million euros (30.46 million pounds) at the start of February, went off injured after 22 minutes.

Zenit were also goalless until the last 10 minutes at Basel, then Chilean midfielder Marcelo Diaz scored from close range for the Swiss champions.

Veteran Alexander Frei converted a stoppage time penalty for a foul on Mohamed Salah by Luis Neto, who was also sent off.