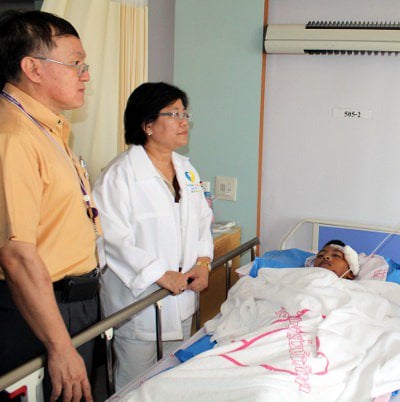 PHUKET: Atthapong Noikhamsin, the 13-year-old boy who survived the motorbike accident in Rawai this morning that killed his Phuket Games teammate, 18-year-old Sutthipong Laphutama, has not suffered serious injury and is being kept in hospital under observation.

“We x-rayed Atthapong’s brain, as well as his neck. They are normal. We operated at 2pm to reset his collar bone, which was broken,” explained Dr Vathit Wattanasap, director of the Phuket Provincial Administration Organization (OrBorJor) Hospital in Rassada.

“He needs some time to recover; then he will be able to play sports again,” he said.

“We are deeply sorry for what happened to the two athletes. We have contacted their parents. Atthapong will remain at the OrBorJor hospital while recovering from his operation,” Vice Governor Sommai said.

“The team was shocked when they were told about the accident. Atthapong was a starting member of his crew and Sutthipong was a substitute for his team,” explained Ms Kingor.

“This morning we took them to the competition site. I don’t know when the two boys left,” Ms Kingor added.

“I can’t get it out of my head. I am always with the athletes. I never thought there would be such a serious accident. Today was the last day of the competition. We planned to head home today after the races,” she said.