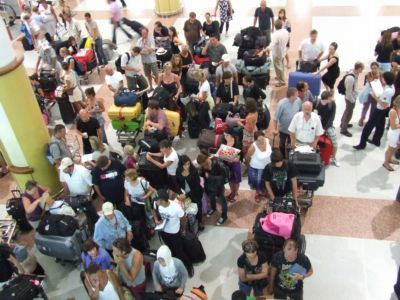 PHUKET: Phuket’s relative prosperity “shows how shifts that transform the global economy can also supply visitors to an attractive destination so steadily that it becomes relatively immune to temporary disturbances,” such as the recent violent demonstrations in Bangkok.

That is the theme of Wayne Arnold in a story about Phuket in yesterday’s New York Times.

Noting that the truly significant story in Phuket was not a calamitous crash in the number of visitors to the island, as oft asserted in local blogs and reader forums, but rather the surprising sustainability of the inflow of tourists and the changes in where they came from.

Arnold has a look at just who’s in and who’s out, and tells us why.

With the Australian dollar soaring, Phuket now draws more Australians every year than it does visitors from any other country.

Scandinavians, whose currencies have rocketed upward recently as the euro has dived, have also been coming in increasing numbers, along with tourists from oil-rich Russia and the Gulf.

All of which is good news for a resort economy like Phuket, where tourism is a $3.15 billion industry accounting for an estimated 70% of all jobs.

Despite the world’s headline grabbing warnings against travel to Thailand, and despite the gloom of Thai tourism officials themselves, who estimate at least a 20% reduction in inbound travel this year, Phuket has been reporting only slight increases in the normal number of hotel room cancellations for this time of year.

“We’ve had some impact, but not as much as in Bangkok,” said Somboon Jirayus, president of the Phuket Tourist Association and a 20-year veteran of the island’s travel industry.

But room cancellations are one thing and airport arrivals are another. As reported in the Gazette last week, the number of international arrivals into Phuket last month increased by 41.4% over April 2009.

Nowadays, Scandinavians are offsetting a shrinking number of visitors from the countries that share the rapidly declining euro.

Russians are another fast-growing source of new arrivals. Rising oil prices and a climbing ruble have brought down the cost of heading to the tropics during the depths of the Russian winter.

Thailand’s tourist industry is quick to exploit new markets like these, Arnold says. Now, Russians represent the fifth-largest group of visitors to Phuket, with more arriving each year than from the United States and Canada combined.

Mr Somboon says the Phuket Tourist Association is currently aiming to promote the island to tourists in another emerging economic powerhouse: India. Phuket is vying to host the annual Tourism Association of India meeting later this year to give it greater exposure to the subcontinent’s travel industry.

Australians who switched to Phuket from Bali seem to prefer Phuket’s greater level of development and its more freewheeling style.

As he downed a lunchtime tequila at Phuket’s Kangaroo Bar, Wayne Trimboli told the Times that Phuket was “more of a big town” than Bali. “I’ll never go to Bali ever again,” he is quoted as saying.

Arnold’s story makes recommended reading for anyone with an interest in Phuket. Click here to read it.