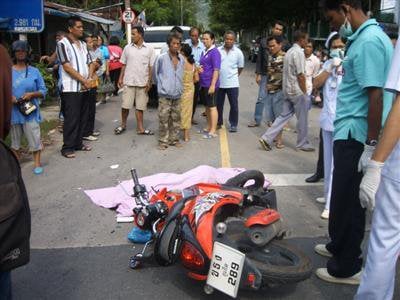 PHUKET: An employee of the Phuket Airport taxi cooperative was killed instantly yesterday when her motorcycle was hit head-on by a pickup truck cutting across traffic at a U-turn on Thepkrasattri Road in Thalang.

Thalang Police were notified of the accident at 3:30pm. At the scene, the turn-off to Baan Pa Krong Cheep off Thepkrasattri Rd southbound in Thepkrasattri subdistrict, they found the victim’s body lying in the middle of the road near a badly-damaged Honda Scoopy motorbike.

She was identified by her ID card as 38-year-old local resident Monthicha Muttarak.

Ms Monthicha appeared to have suffered multiple broken limbs as well as head trauma. There was no crash helmet found at the scene, rescue workers said.

A local resident who knew the deceased said she expected Ms Monthicha had finished her shift at the airport and was on her way home when the accident occurred.

The driver of the pickup, also a local resident, fled the scene and took refuge at a friend’s home out of fear of reprisals from friends of the deceased. He left his vehicle at the accident scene. His identity is known by police and he will be charged with reckless driving resulting in death, officers said.

Kusoldharm Foundation workers took the body of the late Ms Monthicha to Thalang Hospital morgue for further examination and storage until it can be claimed by relatives.