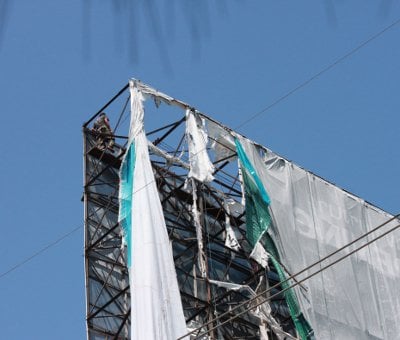 PHUKET: A troubled man, who this afternoon climbed atop a billboard opposite the Central Festival Phuket shopping complex, has climbed down to safety and is now in police protective custody.

“Mr Sathien told us that he had come to Phuket to find his wife [“Mia”] and three children. He said that she had run off with them, reportedly to Phuket,” said Col Sermphan.

“However, the wife’s father told us that his daughter had left Mr Sathien because he was constantly unemployed and allegedly beat her,” he added.

The father-in-law also explained that his daughter had never come to Phuket. Apparently, she remained in Trang province with the children, Col Sermphan explained.

“Mr Sathien arrived in Phuket on August 20. Today, when he finally ran out of money, he decided to climb the billboard with the intention of jumping,” he said.

After the drama began, at about 1:30pm, police deployed a large inflatable air mattress to cushion his fall should he decide to go through with his suicide threat.

After about one hour, Mr Sathien climbed down to safety – but only after talking directly with this wife on a mobile phone while was sitting atop the giant structure, which stands at least 30 meters tall.

Police have reopened the one lane closed during the drama and traffic flow through the critical junction has now returned to normal.