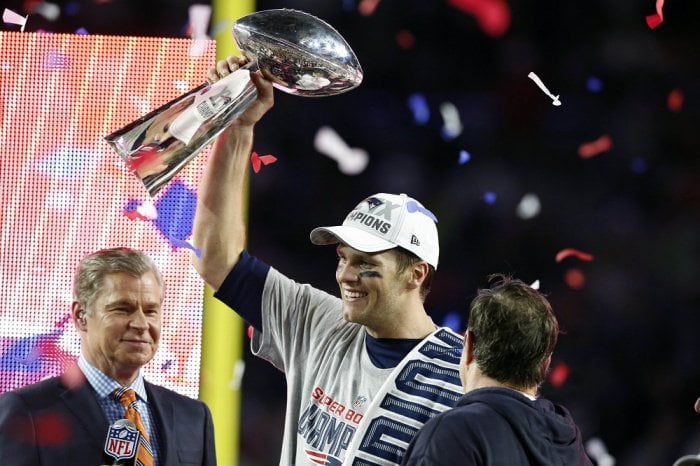 The victory put New England alongside five other teams with at least four Super Bowl wins while Tom Brady joined Hall of Famers Terry Bradshaw and childhood idol Joe Montana as the only quarterbacks with four championship rings.

Brady fired four touchdowns, including two in a frantic fourth quarter, to give him a record 13 Super Bowl touchdown passes.

“Wasn’t the way we drew it up,” Brady said about the 10-point fourth-quarter deficit. “Certainly throwing a couple picks didn’t help. Lot of mental toughness and our team showed it all year.”

Seattle had a chance to steal a dramatic win after a circus catch by Jermaine Kearse put the Seahawks deep in Patriots territory. But a Russell Wilson pass was intercepted at the goal line by Malcolm Butler with 20 seconds to play to seal the victory.

“I just had a vision that I was going to make a big play and it came true and I’m just blessed,” said Butler, who was also covering Kearse when he made the spectacular circus catch. “I can’t explain it right now.

“I just knew they were stacked  it all comes down to preparation. I just made a guess and made a play.”

Down by 10 points midway through the fourth quarter, Brady cemented his legacy as one of the NFL’s all-time greats, engineering to long scoring drives capped by touchdown passes to Danny Amendola and Julian Edelman to retake the lead.

The buildup to the Super Bowl had been dominated by a controversy over deflated footballs used by the Patriots in a blowout win over the Indianapolis Colts in the AFC title game that earned them a trip to Arizona and a whiff of scandal hung over University of Phoenix Stadium as the NFL investigation into the matter continued.

The game represented a last chance for the NFL to put a scandal scarred season behind it and the Patriots and Seahawks did their part, providing an afternoon of edge-of-your-seat drama.

“Every year if you’re privileged to get to this game, hard things happen,” said Patriots owner Robert Kraft. “I’m so proud of Brady and (coach Bill) Belichick for handling things the way they did.

“I love them. And all our Patriots fans should feel very good.”