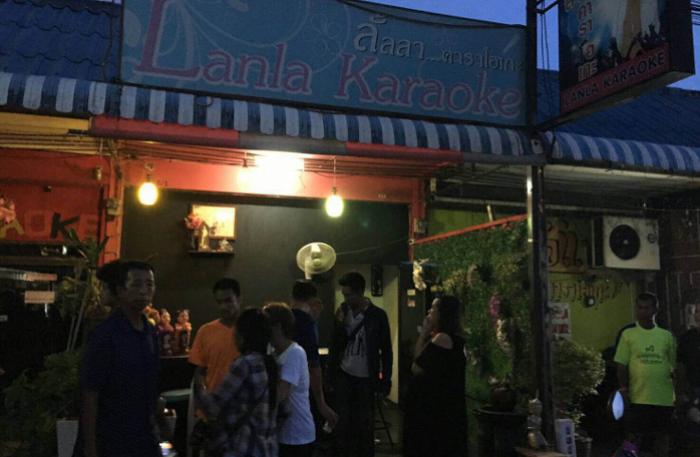 PHUKET: One man is dead and another wounded after they were attacked outside a karaoke venue in Patong during the early hours of the morning.

According to Patong police reports, the fight began in the Mon Can Cafe at 2:30am. “Rachan Banlangsuang, 32, said he was finishing a shift waiting tables at the cafe, when he and the cashier, a man we are identifying at this time as Mr Ble, 26, got into an argument over the evening’s take amount of money from the evening,” said Col Chaiwat Auikam of Patong Police.

Mr Ble reportedly grabbed a knife and cut Mr Rachan’s arm. Mr Rachan went to Patong Hospital for the injury, before returning to Mon Can Cafe. Wichithep Jomjabok, 28, accompanied Mr Rachan to speak with Mr Ble, who is his cousin.

Mr Ble, evidently dissatisfied with their conversation, gathered a group of friends and attacked the pair, who fled to the nearby Lanla Karaoke. The group of assailants stabbed Mr Rachan twice; once in the shoulder and again in the back.

Mr Wichithep was killed in the confrontation. “His body was found shirtless and with his jeans ripped, on the floor inside the venue. He was reportedly stabbed twice in the left chest, and slashed, once on the cheek and once on the arm,” Col Chaiwat said.

Police said they are still hunting for Mr Ble and his accomplices. Mr Rachan is recovering from the attack in Patong Hospital.