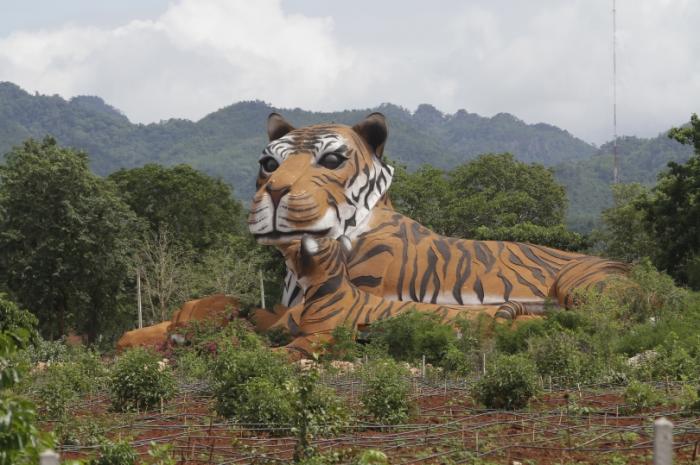 KANCHANABURI: The ‘Tiger Temple’ could be permanently closed if its land use permit from the Agricultural Land Reform Office (ALRO) is revoked, the National Office of Buddhism disclosed yesterday.

With the National Parks, Wildlife and Plant Conservation Department (DNP) relocating all tigers from Wat Pa Luangta Bua, better known as the ‘Tiger Temple’, and finding evidence of illegal trading in wildlife last week, the Kanchanaburi temple has been in the public spotlight.

The ALRO is investigating land use issues related to the 391 rai (62.6 hectares) that the temple acquired from the ALRO to build the monastery, which was designated exclusively for religious purposes.

Pradab Phothikanchanawat, director of the National Office of Buddhism’s Kanchanaburi office, said there would be no choice but to comply if the ALRO finds that the temple misused the land.

“There will have to be a discussion between the ALRO and the National Office of Buddhism to find the best solution for questions about the temple’s use of land. If the final decision by the ALRO is to revoke the temple’s land deed, it will have to close,” Mr Pradab said.

According to an earlier report, the ALRO was investigating the temple to determine if the land was being used exclusively for religious purposes. If the organization determines the temple misused the land, it will file a complaint with the National Office of Buddhism.

The temple would then be allowed a chance to improve its land use practices, the report said, but its licence would be revoked if it failed to so.

The ALRO is also cooperating with the Royal Forestry Department and Lands Department to determine whether the temple has illegally expanded beyond the 391-rai plot, but that allegation could take months to verify.

Mr Pradab said the National Office of Buddhism had yet to receive a letter from the ALRO.

Mr Adisorn said he believed the discovery of the remains of many tiger cubs was connected with three tigers that went missing from the temple last year, adding that the suspects might be the same in both cases.

He said the department found evidence that temple abbot Luang Ta Chan had signed an agreement with Laos to exchange tigers.

He added that if DNA test results from the tiger cub remains do not match the DNA of the seized tigers, there would be solid proof that the temple had been involved in illegal trade in wildlife.

He also asked Col Chalermkiat to transfer the case from local police to a central investigative agency to ensure a quick and transparent probe.

Col Chalermkiat said police would consider the DNP’s information carefully and investigate to find leaders of the alleged wildlife trading. Police would bring justice to both sides, he said.

Saiyut Pengbunchu, a lawyer for the Wat Pa Luangta Bua Foundation, said the abbot, Phra Vissuthisaradhera (Luang Ta Chan), who went missing on May 29 and may face legal action, would return to the temple to explain issues to the media on Thursday.