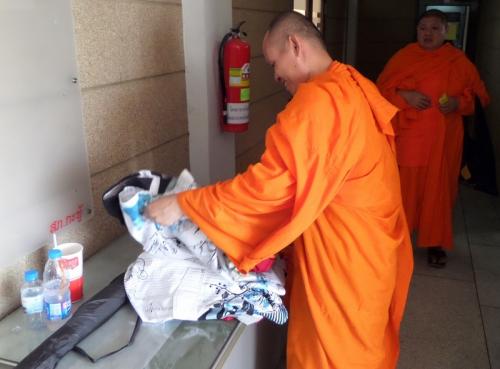 PHUKET: A monk and two female friends having a sex party in a Patong hotel room were busted by police for drug use yesterday, and the monk was subsequently defrocked.

After receiving a tip from local residents, police raided a hotel room at the southern end of Patong Beach.

“We went to the location provided and found a monk and two women in the room,” said Patong Deputy Superintendent Akanit Danpitaksat.

All three tested positive for drugs, he added.

“The women told police that Phra Piroj was their friend. He travelled from Nakhon Sawan to Phuket and rented the room in Patong. They said they took drugs and had a sex party,” he said.

Phra Piroj was handed over to the senior monk at Laem Petch temple in Patong, where he was defrocked and cast out of the monkhood.

“We have yet to charge any of the suspects as we are still waiting for laboratory results from the Regional Medical Sciences Center in Phuket to confirm the drug use,” Col Akanit said.

“The drug tests we did initially were preliminary tests only. They can be used to place suspects under arrest, but cannot be used in a court of law,” he explained.

Phuket full-scale tsunami drill not to be announced in Russian