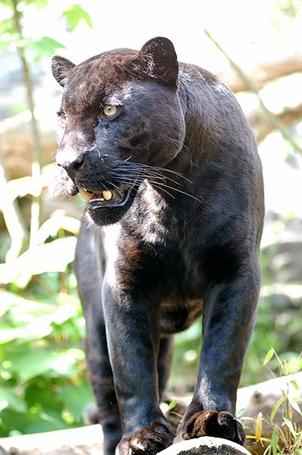 CHUMPHON: A huge black panther has been attacking livestock in a village next to a national park in Muang District.

Local resident Sanguan Damsanit told reporters on January 6 that he saw the animal on New Year’s Day in a field in Tambon Tha Yang.

Mr Sanguan, 55, said that when he went to round up his eight head of cattle for the night at around 6:30pm, he saw a black panther devouring one of his calves. He estimated the animal’s body length at around 1.3 meters and said it stood a full meter tall.

After running back to the village in fear, he and other villagers returned to the area armed with shotguns and machetes to try and catch the beast, but it had gone. In his absence the panther attacked another of his calves, but only wounded it.

The animal is also suspected of having eaten some village dogs.

Thawee Bunyakon, 50, a former village chief from a neighboring village, said that judging from its footprint, the panther was a large adult.

Mr Thawee said panthers aren’t usually fierce like tigers and that he had never heard of one in Chumphon before. He said he believed the animal must have lived in the nearby Hua Kroot Hills and been forced down from the hills by extreme hunger.

Alternatively, it could possibly have been a wealthy person’s pet that had been dumped in the national park when the owner got bored with it, he said.

Worried that the panther might attack village children, Mr Thawee called in the livestock department to hunt it down.

Phuket kids have their way on Children’s Day