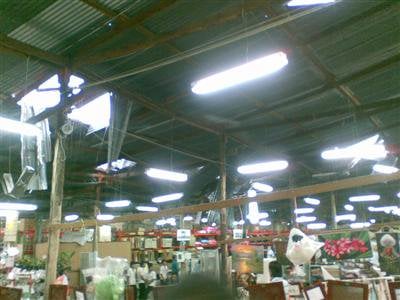 RASSADA, PHUKET: Shoppers at discount retailer Supercheap got a scare early this morning when three sections of roof blew off and fell onto the merchandise below, causing considerable damage and a public panic.

Fortunately, there were no deaths or injuries.

The collapse came around 7.30am, during some of the heaviest rains so far this rainy season.

The roof, made of corrugated zinc panels and supported by unfinished lengths of timber, came down suddenly.

Electrical wiring and lighting also came crashing down, shattering on the concrete floor.

Additional damage was caused by rain that fell though the open sections onto merchandise before it could be moved to safety by staff.

One customer inside at the time told the Gazette he thought the noise of the zinc panels ripping away was just part of a construction project going on inside the store.

Then the first section of roof suddenly collapsed, causing a great deal of panic and screaming, with shoppers running for their lives toward the exits, he said.

Despite the surprise, the customer said he would continue to patronize the store.

“I don’t mind that their roof is gone. I’m sure they will fix and reinforce it. I still want to shop at Supercheap because the prices are the lowest and they have such a wide variety of goods available,” he said.

Today the Supercheap staff are busy picking up the pieces and trying to repair the damage.

The store remains open for business as usual, but staff have cordoned off the damaged areas and put up warning signs.

It is not the first accident that has happened at Supercheap.

A few years ago one of its warehouses was gutted by fire.

The store has also been the target of some vicious rumor-mongering in the past.

Back in 2002, a local Thai-language newspaper carried a report that a female shopper there was killed after being bitten by a king cobra hiding at the bottom of an onion display.

The store’s management vehemently denied the report, dismissing it as ‘poisonous nonsense’ and part of a smear campaign initiated by a rival retailer.