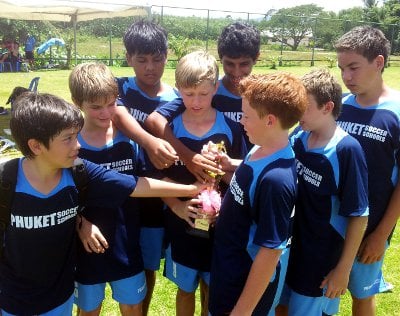 The tournament saw the finest juniors teams on the island compete in two age groups, with players represented at Under 11 (U11) and U13 levels. Each age group consisted of 10 teams in two groups of five.

The PSS Academy U11 squad were unlucky to go down 0-1 to the hosts YFH in their opening match but they bounced back to beat Headstart 5-1 (after conceding an early goal). Khun Fard scored a great hat-trick, with Joe H and Poom also hitting the back of the net for PSS.

The next match saw the U11’s tie a close game with Plukpanya 0-0 and then finish their group matches with Joe H scoring a long range rocket in a 2-0 win against Hong Yok. This final result meant PSS Academy finished 3rd in their group and met Kata Group in the quarterfinal.

The match started tight with both teams looking to keep the ball and work some opportunities. Kata Group opened the scoring midway through the game and with PSS pushing up to equalize Kata Group scored again on the break and went on to win the match 2-0.

This left the PSS Academy U11’s as losing quarter finalists but the team showed great endeavor and enthusiasm throughout the whole weekend. Kata Group went on to lose the final of the U11 division to Bang Jo United on penalties after a 1-1 tie in regular time.

PSS Tournament Man of the Match went to Fard for his overall work rate and excellent attacking play.

PSS Academy U13 played in the same set up as the U11’s with four group matches on the Saturday before the play offs began on Sunday. The U13 squad had a lot of possession in their first game and created many chances but were unable to capitalize as they tied 0-0 against Kata Group.

Up next they played a strong Nong Film FC team who were visiting from Buriram. Nong Film passed the ball well and had a clinical striker, with the match finishing 5-1 to the Buriram team.

The U13’s then played the hosts YFH in their 3rd group game. The game was end-to-end stuff and PSS Academy took the lead early on through Danny P, before YFH hit back with two goals to take the lead themselves. Jakk S then went on to score two more unanswered PSS Academy goals as the U13’s went on to record their first victory of the tournament with a 3-2 scoreline.

The final match of the day saw PSS Academy play an experienced Para FC team. Despite an even start to the match, Para FC stepped up a gear and went on to easily win the match 5-2, with Peter K and Ian S finding the net for PSS Academy.
PSS Academy finished third in their group and played their quarter final against Hong Yok FC. PSS Academy’s defended extremely well and scored 2 goals from Jakk S free kicks to come out 2-0 winners. This meant they played Plukpanya in the semifinals and despite PSS Academy giving it their all, Plukpanya were just too experienced and went on to win the match 5-2 with Jakk S scoring both goals.

PSS had one more game as they met YFH again in the 3rd/4th play off match. This time around chances were few and far between as both teams defended deeper to prevent any mistakes. PSS Academy were able to score the only goal of the game through top scorer Jakk S and held on to win 1-0 and claim a well deserved 3rd place trophy. Plukpanya went on to win the U13 division with a 2-0 victory against Para FC in the final. Jakk Street earned the Tournament Man of the Match award for the eight goals in seven games he scored over the weekend.

The tournament was a great experience and learning curve for the PSS Academy players and the coaches were happy with the performances from their teams. The knowledge the young players gained will put them in good stead for future tournaments.

PSS Head Coach Martin Hill said “we always look forward to this prestigious tournament in Thalang. Our club was well supported on the touch lines from fans and parents, and the teams responded with some great footballing moments that will remain with us forever. Tournaments also give you a good insight as to where we are in the footballing world of Phuket and we are moving in the right direction. Many thanks to the YFH organizers and referees who made the weekend a well run event”

Phuket Soccer Schools will be running a 4v4 tournament on today at TSLC for U9’s and U12’s and also a soccer camp for ages 5 to 12 during the week of October 15 to 19 at BIS, for more information on this and our coaching / academy program please e-mail info@phuketsoccerschools.com.