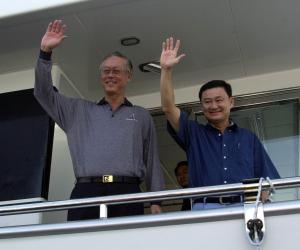 LAGUNA: Relaxed, smiling and looking like old friends, Prime Minister Thaksin Shinawatra and his Singaporean counterpart Goh Chok Tong today met members of the press and told them that their talks in Phuket had been, in PM Thaksin’s words, “wide-ranging, revealing and most productive”. There were three main areas of discussion – global and regional development; strengthening the Association of Southeast Asian Nations (Asean); and boosting bilateral ties. Central to their discussions was the opening up of the Greater Mekong Subregion (GMS), with Thaksin pushing hard for Chiang Mai to become the major aviation hub for the GMS and its population of 250 million people, as a way of massively boosting tourism in Thailand. He told the press conference, “We need more tourists for Thailand. Eleven million is not enough. We need 60 million. “I have to find more airlines to fly from Chiang Mai to cities [in the GMS]. If we have to wait 10 years that is too long for me. I want to have it tomorrow, so I need many airlines to come to fly to that region. “So I asked Prime Minister Goh whether SIA was interested. If I were an investor I would [expect to] lose money for several years. The airlines must be very low-cost or you cannot survive.” Describing Thaksin as a “go-getter”, Mr Goh was rather less enthusiastic, saying, “Singapore could perhaps play a role by examining the possibility of working with Thailand to set up … a budget airline.” The details needed to be studied, he said, adding that Singapore Airlines “is interested” but that there was no question at the moment of going ahead because of current economic conditions. The two men seemed to have very similar ideas, however, on methods to tackle terrorism in the region but without, Goh stressed, alienating “the vast majority of Muslims who are moderate and who are against terrorism”. They agreed that this could be tackled through economic development, education and dialog with Muslim leaders. They also agreed that Asean must be strengthened to face the challenges posed by the economic might of China and, not far behind it, India. Thaksin said they discussed efforts to achieve greater economic integration to move toward an “Asean Economic Community”, embracing “freer flows of investment, services, tourism and labor”. Goh had plainly enjoyed the informal format of the talks. It was, he said, “a unique meeting of heads of government”, with the two men spending four hours in talks over dinner last night, then three hours more on a yacht today, followed by more discussions over dinner this evening. “There were certain areas where we could not agree,” he added, “but we would not mislead each other.” Of the boat trip, he said, smiling, “I didn’t see many islands, or the sea, because we were looking at one another for three or four hours. So if you ask me what Phuket is like, I would say I don’t know.” The two leaders will play golf at Blue Canyon tomorrow, but this too will be an opportunity for more discussion, Mr Goh said. “If you think we’re just playing golf, you are wrong because normally after a good game of golf we will settle a few deals.”

Skull and bones found on island