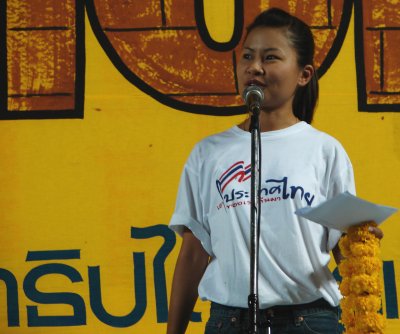 The protest, the second large PAD rally in the province, got underway at dusk and finished about 2 am, attracting about 10,000 people by the time the PAD heavyweights took the stage at around 11 pm, its organizers claimed.

Speaking in front of a stage backdrop reading “No! ThaksinoMIC”, Phuket Rajabhat University Asst Prof Chayen Muangman started the evening’s fiery rhetoric, telling the crowd that it was up to the people of the South to save the nation from domination and exploitation by Prime Minister Thaksin Shinawatra and “his cronies”.

“All branches of the Thai government have fallen under his grip. Most of the newly-elected Senators are related to MPs and other government figures under the control of the Thaksin regime. How will the Senate ever be able to check the government’s power?” he asked.

Uthai Suksirisamphan, who came up short in his bid to win the Phuket Senate seat last Wednesday, said he had wanted to volunteer as the Phuket people’s representative in the fight against the Thaksin regime. He urged the crowd to abstain in Sunday’s parliamentary poll.

When Chamlong Srimuang addressed the crowd at about 11 pm, he said the rally was in no way intended to harm tourism in Phuket – as some people had charged before the event. He told the crowd that, on the contrary, there would be an improvement in the economy here if PM Thaksin removed himself from politics altogether.

The PAD plans to stage rallies in other Southern provinces in order to keep up the pressure on the PM.

The alliance sees Phuket as a key province in the fight to keep PM Thaksin from forming a government, as both TRT candidates, running unopposed, failed to get the 20% of the eligible vote required to take a seat in the lower house in the last ballot, on April 2.

Without a full quorum of MPs, Parliament cannot convene.

In both Phuket constituencies, the “vote for nobody” exceeded the votes garnered by the TRT candidates by a factor of nearly four to one.

In Sunday’s by-election, however, both TRT candidates will be running against candidates from little-known minor parties, which means they will need votes equivalent to only 5% of all registered voters in their respective districts in order to take a seat in Parliament if they win.

In District 2, the eligibility of Pattana Chart Thai candidate Prayoon Poonchan is the subject of a lawsuit before the Supreme Court.

K. Prayoon ran for Parliament in Nakhon Sri Thammarat in the April 2 poll, but failed to win a seat.

If the Supreme Court rules – whether before or after the poll – that he is ineligible, his TRT opponent, Wisut Santikul, will need to garner votes equal to 20% of the electorate, a figure he fell well short of on April 2.