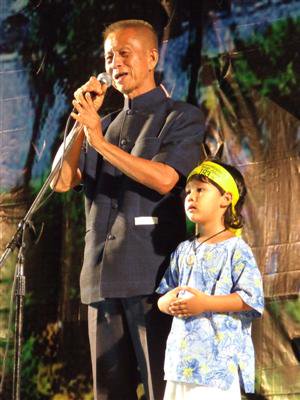 Maj Gen Chamlong Srimuang, one of the PAD’s five core leaders, told the crowd he felt happy to see such a large number of supporters pour in from all over the country.

He never expected the planned concert would have to be staged without fellow core PAD leader Sondhi Limthongkul, who survived an assassination attempt in Bangkok on Friday morning, he added.

Mr Limthongkul, who owns the ASTV satellite television network, is recovering after successful surgery to remove a bullet that lodged in his skull.

For an update on his condition and related developments, click here.

“I assure you that the motive behind the assassination attempt on Mr Sondhi was not ‘political’, because differences of opinion between rival political groups are a normal part of the political process,” Gen Chamlong told the crowd.

“The real motivations were twofold. First, Mr Sondhi is an important leader in the movement to protect our three key institutions of country, religion and King. If [his attackers] were able to take out Mr Sondhi, the yellow shirts would rise up against the red shirts and become involved in open conflict that would have been beyond the government’s ability to contain. With that, some parties would try to take advantage of the situation to assume control. Fortunately, by some miracle, Mr Sondhi has survived.

Second, growing political development and public awareness of political issues are higher than they have ever been in the history of the country. With [Mr Sondhi’s] ASTV as the mouthpiece, they [his attackers] believed they could weaken the movement by finishing off Mr Sondhi,” he said.

Maj Gen Chamlong added that recent events demonstrated the difference between the two sides, as PAD supporters were unarmed and used only non-violent public gatherings to get their message across.

The red-shirted protesters of the rival United Front for Democracy against Dictatorship (UDD), while claiming to use similar non-violent tactics, exposed their true nature by seizing 60 public buses and setting 30 of them on fire in the capital recently, as well as threatening the safety of Bangkok residents by threatening to explode a gas tanker in their neighborhood, he said.

Maj Gen Chamlong also asked the PAD supporters to feel proud of their own past actions, which he said were done for the good of the nation.

The event, which ran from 5pm to midnight as planned, included several musical performances, donation announcements and speeches slamming former prime minister Thaksin Shinawatra for his failure to return to Thailand and face legal charges.

The event earned more than 1 million baht. Some 300,000 would go to cover expenses and the remainder to support ASTV, the organizers said.

Even though there was no fence around the concert ground and very little crowd control, there were no reports of violence or infiltration by UDD members, who are greatly outnumbered by PAD supporters in Phuket and most of the South.