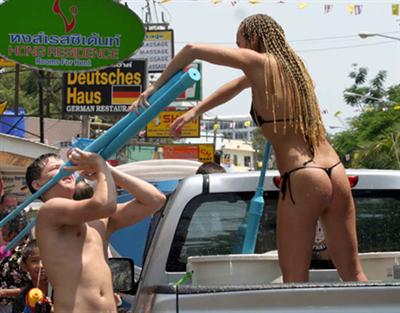 PHUKET CITY: The final tally for this years’ “Seven Days of Danger” road safety campaign over the Songkran holiday period in Phuket is four dead, with 60 people injured in 60 road accidents.

The figures are almost identical to last year, when four were killed and 64 were injured in 64 accidents.

In the annual accounting, only injuries requiring admittance to a hospital for treatment are recorded.

A total of 78,188 vehicles were called over for inspection at road checkpoints set up across the island over the period, with a total of 6,315 people arrested or fined.

The most common violation was driving without a license (2,509 cases), followed by operating a motorbike without a helmet (1,648), riding in the front seat of a car without wearing a safety belt (922), and riding an unroadworthy vehicle (461).

There were 16309 people tested for drunk driving, with 775 charged.

The number of deaths increased by five from last year, but there were 471 fewer injuries and 266 fewer accidents, said Interior Ministry permanent secretary Wichai Srikwan.

Meanwhile, Trat, Chachoengsao, Yasothon, Amnat Charoen, Sakon Nakhon, Nan and Yala provinces did not report any deaths during the period.

On Thursday alone, there were 52 deaths and 371 injuries in 343 road accidents.

Motorcycles were the vehicles most involved in road accidents, about 82% of all vehicles. The biggest cause of accidents was drunken driving (40.7%), followed by speeding (20.0%).

The Public Health Ministry reported that its emergency units had given medical assistance 21,456 times and 74% of victims had received help from the units within 10 minutes.

Ministry officials, checking alcohol sales, randomly inspected 28 provinces in all four regions between April 10 and this past Wednesday and found that three times more shopkeepers on secondary roads violated the Alcoholic Beverage Control Act of 2008 than on main roads.

Alcoholic drinks were also sold in petrol stations, which is prohibited. Out of 661 petrol stations inspected by the officials, alcoholic beverages were found on sale in 102, 28% on secondary roads and 9% on main roads.

A total of 140 out of 767 inspected shops violated the Act by selling alcohol outside legal hours.

PAD concert goes off without a hitch