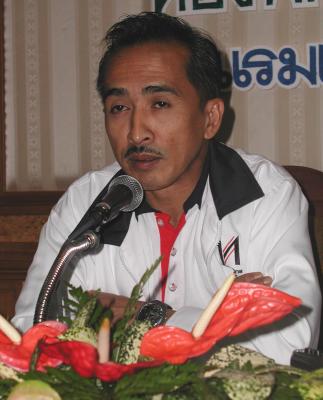 PHUKET TOWN: The final day of registration for the Phuket Provincial Administration Organization (OrBorJor) elections today had more twists and turns than an Olympic slalom course. Sudden career changes and dark allegations of death threats were the order of the day as Samroeng Chaisorn, anointed as the Thai Rak Thai (TRT) party’s candidate just over three weeks ago, announced he had decided not to pursue elected office. Coming to the aid of the party was no-nonsense Pol Col Apirak Hongtong, former Deputy Commander of the Phuket Provincial Police, who stepped up to bat for the TRT in K. Samroeng’s stead. The topsy-turvy day climaxed a week in which speculation mounted over TRT strategy, and over the whereabouts of K. Samroeng, who had dropped out of sight. Col Apirak registered as TRT candidate at the provincial offices just 30 minutes after K. Samroeng resurfaced at a media conference at The Metropole hotel to announce his withdrawal. There, K. Samroeng read a prepared speech that only deepened the mystery over the reasons behind his decision not to stand. He recalled how he had worked with the man the other candidates are seeking to replace, former President Dr Prasit Koeysiripong, in setting up a TRT center in 1998 and getting involved in the OrBorJor. He said he would continue to work for the TRT but added cryptically, “I don’t want Phuket to be separated into two: Phuketian and non-Phuketian. “Phuket in the future will be more developed so we need unity. I urge people to vote; if they really don’t like any of the candidates, [then they should] just vote for no one.” He then left the podium, ignoring journalists’ questions. At Col Apirak’s registration, K. Pichate, who oversees TRT politics in the Andaman region, shed some sinister light on events in this turbulent week for the TRT. He said that he had tried to meet with K. Samroeng once the candidate’s reluctance to stand became obvious. But, K. Pichate said, relatives at K. Samroeng’s home told him that K. Samroeng and his family had moved out for a while after receiving death threats. K. Pichate then went on to sing the praises of the new candidate as a police veteran with a fine reputation. “I think I have chosen the best person for the people of Phuket,” he said. “Yesterday Col Apirak and I went to Bangkok and he became a TRT member. Today I am here to cheer him and support him as he registers for the OrBorJor election. “If we have a TRT representative as OrBorJor President, local problems can be communicated to the party more effectively. He can be the eyes and ears of the party.” Col Apirak told journalists, “I quit as [a police] officer yesterday. I have been working for the people of Phuket for many years as a policeman and I hope to keep working for them [in politics]. “I want to promote Phuket to be No 1 in tourism. I understand the security aspects very well. “I had planned to serve in the police force for two more years but when K. Pichate invited me [to stand in the election], I agreed because I am interested in politics as well.” In the afternoon came the third surprise of the day: the appearance of Soratham Jinda – a Vice-President of the OrBorJor in the days when it was an appointed body – who registered as an independent candidate. His candidacy was hinted at earlier in the day when K. Samroeng said mysteriously in his speech, “K. Soratham is like my brother, so I should support him. You can draw your own conclusions.” Registration is now closed, so the contest for the OrBorJor presidency will be a four-cornered fight – unless, of course, anyone else gets death threats.