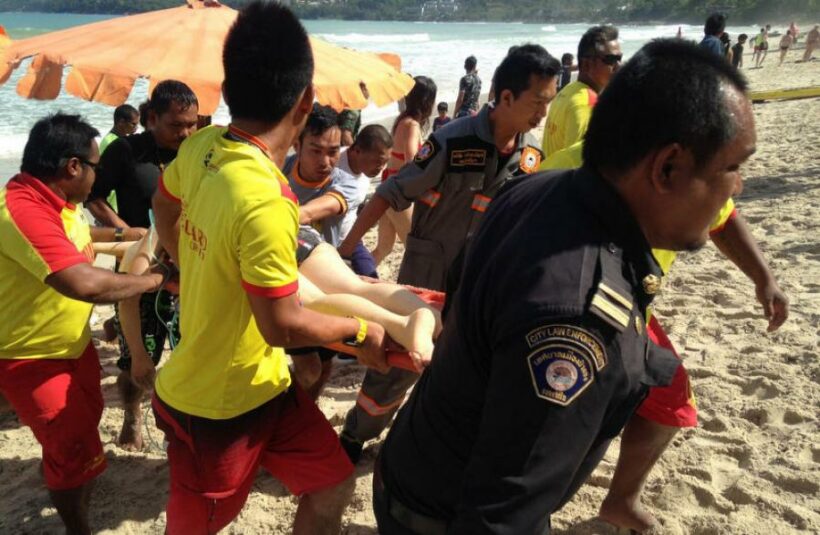 PHUKET: Two Thai tourists were safely rescued while one is still missing after the trio went swimming in a red-flagged area at Karon Beach yesterday afternoon.

Officers from the Karon Tourist Help Center and Karon Police searched for Mr Arnon using jet-skis this morning, but were unable to find any trace of the 28-year-old.

“He was here with seven of his friends. They all went swimming despite the red flags placed there to warn them of strong waves. Three of them were dragged into the ocean, but lifeguards were only able to rescue two, who are now safe,” said Col Charnarong.

Meanwhile, at Patong Beach, four Chinese tourists were rescued from drowning by lifeguards there this morning.

The tourists ignored the red flags as well as lifeguards’ verbal warnings and decided to go swimming in a red-flagged zone.

“Lifeguards warned them not to go swimming in the area and even pleaded with them, but they didn’t listen,” said Somprasong Sangchat, head of the Phuket Lifeguard Club.

All four women were dragged in by strong waves and lifeguards used jet-skis to safely bring them back to shore.

“They were all unconscious when we dragged them out of the water. One of them was also given CPR (cardiopulmonary resuscitation) until the ambulance arrived to take them to Patong Hospital,” said Mr Somprasong.

“These incidents occur very frequently at Patong and other beaches. We urge people to pay heed to lifeguards’ warnings and avoid swimming in red-flagged areas, especially during stormy weather,” he added.