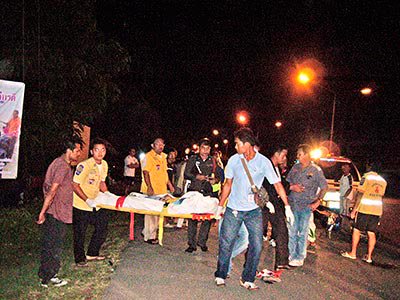 PHUKET: A young woman was killed and two teenage boys injured when their motorcycles collided at a U-turn in Thalang early this morning.

Capt Praman Yukkaphan of Thalang Police identified the deceased as Urairat Khongket, an employee of a rubber glove factory in Baan Manik, Srisoonthorn.

Ms Urairai was a resident of the nearby Kan Keha (National Housing Authority) low-income housing estate.

She was attempting to do a U-turn when she was hit by another motorbike ridden by Phonphon Yadthip and Ailwin Jumon, both 16 years old.

Ms Urairat’s body was taken to the morgue at the same facility.

Her family in Nakhon Sri Thammarat’s Chian Yai District have been informed of the death and are travelling to Phuket today to claim her body.

“It’s a shame the scrums are not contested.” at Phuket 10s