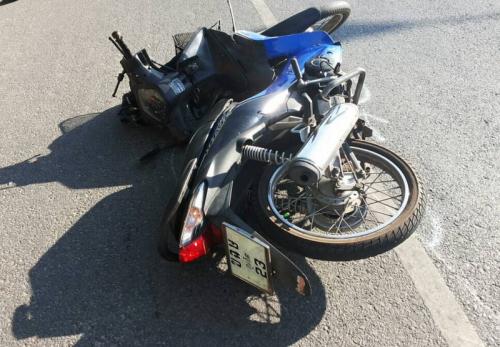 PHUKET: One Phuket teenager died and two were seriously injured after the motorbike they were driving slammed into a pick-up truck early this morning.

The three friends had left school together to pick up supplies for a scout camping trip.

Police and Kusoldharm Rescue Workers were called to the scene, in front of Baan Suan Neremit housing estate near the Heroine’s Monument in Pa Khlok, at 8:30.

“When we arrived, we found three students wearing Chalermprakiat School uniforms on the road. Only the driver was wearing a helmet,” said Lt Col Kittipoom Tinthalang of the Thalang Police.

“They had rear-ended the back of a pickup truck that was waiting to make a right turn.”

The 15-year-old driver, Chaiwat Chayliam, had broken his legs and arms. He was given CPR at the scene, then transferred to Thalang Hospital. Doctors tried for an hour to save his life, but couldn’t, said Lt Col Kittipoom.

The boy who had been sitting in the middle, Pongsakorn Pannattee, 15, was unconscious when rescue workers arrived. Chatdanai Thammachot, 13, the rider in the back, was conscious and able to speak.

Both students were taken first to Thalang Hospital and then transferred to Vachira Phuket Hospital, Col Kittipoom said.

The distraught driver of the pickup, Rachadaporn Phonkwamdee, 39, was at first unable to give a statement to the police.

“I was waiting to turn right to go into my house. I had put on the turn signal already, but they hit my car anyway. I saw them fly off onto the road,” she said, beginning to cry.

Police called the school and a teacher came to the scene.

“The teacher said that the students had permission to leave school to pick up things for a scout camping trip tomorrow in Nai Harn,” Col Kittipoom said.

Phuket Marine Office offers B10,000 reward for pictures of oil-dumpers