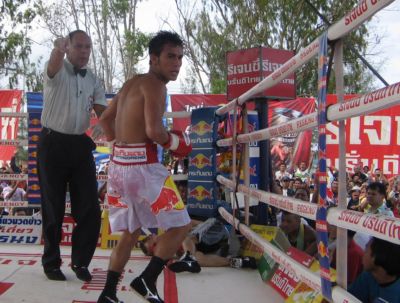 Sithsamerchai, a southpaw, was in complete control of the bout from the outset, winning every round on the judge’s scorecards.

Last November, Sithsamerchai, 23, established himself as one of Thailand’s most talented boxers, outboxing Eagle Kyowa to win the strawweight (105lb) title.

Ebisuoka started quickly; winging looping left hooks and advancing without fear. Sithsamerchai remained composed, countering with right hooks and straight lefts and sliding to his right. The champion found his rhythm in the next few rounds, counterpunching effectively.

Ebisuoka, grinning demoniacally at times, continued to press forward, but was largely ineffective and missed often. By the sixth round, Sithsamerchai’s counterpunches were taking their toll and Ebisuoka was flat-footed. Sithsamerchai was no longer moving to his right, instead electing to stand directly in front of his opponent where he could slam his punches into the body.

Midway through the final round, Sithsamerchai landed a punishing right hook-left hook combination to the belt of the challenger. Referee Malcolm Bulner stopped the action momentarily to issue a caution to the champion for the borderline blows.

When the bout resumed, Sithsamerchai scored five unanswered punches to the body of Ebisuoka, who collapsed to the canvas and was counted out.

Sithsamerchai, known more for his excellent boxing skills than his KO punch, has ended his last three of four fights by knockout. The bout was the 23-year-old’s first defense of his WBC world title.

PM in urgent meeting with Army and Police chiefs