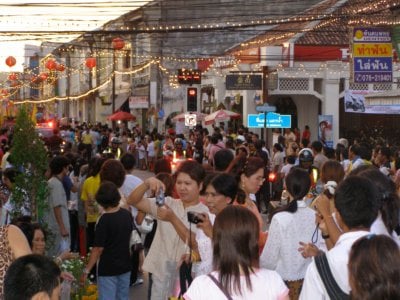 Phuket City Mayor Somjai Suwannasupana led the Old Phuket parade through the city’s old quarter, followed by hundreds of people dressed in traditional costumes, such as the local baba and yaya dress.

The activities, shows and amusements will continue from 6:30 pm to 10 pm tonight and tomorrow night at Queen Sirikit Park and along Thalang Rd.

Near the park, people will be able to board a gor jan boat, and travel along a section of Klong Bang Yai as Phuket City residents once did.

An exhibit showing photographs from HM the King Bhumibol Adulyadej’s visit to Phuket in 1959 will run in the park from 5 pm to 10:30 pm for the length of the festival, while a display entitled old Sino-Portuguese Phuket will run simultaneously at 63 Thalang Rd.

The festival will close tomorrow with a Chinese prayer ceremony, a lion dance performance and a puppet show in the park.

Sections of Phang Nga Rd and Thalang Rd, and all of Soi Rommanee, will be closed to traffic during the festival.

Woman gunned down in Kamala