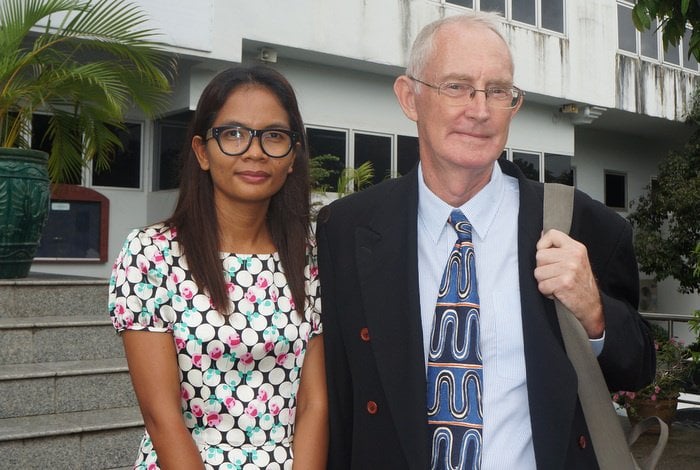 “We’ve been waiting for two years for today. The judges have done his job,” Ms Chutima told the Phuket Gazette. “It is great to know that Thailand has freedom. This is good for Thai people and reporters. We can continue to be critical of what happens in Thailand based on facts and the truth.”

According to the court hearing, the charges against the pair stemmed from a report published on July 17, 2013, which contained excerpts from a Reuters special report alleging that some Thai naval security forces worked with human smugglers to profit from the exodus.

In April last year, Mr Morison and Ms Chutima were charged for the report and released on bail. Also charged was Big Island Media, the operators of PhuketWan.

The case was brought to court after numerous failed attempts to negotiate, confirmed Capt Pallop Komalodaka of the Royal Thai Navy, who was authorized to file the complaint to police against the suspects.

The first day of the trial was on July 14. The following day, the defence team began its case, during which Mr Morison and Ms Chutima gave their testimonies and denied the charges. On Thursday, a series of expert testimonials for the defence was heard (story here).

The witnesses were not cross examined by the prosecutor on either day.

“We feel a great sense of relief that the Thai judges are being so open and transparent,” Mr Morison said ahead of the verdict being announced. “To me, now that the allegations have been repeated in open court, an investigation should take place into the Reuters claims. And see whether there’s any truth in the claim or not.”

A Reuters spokesman has acknowledged the role that Ms Chutima played in the development of their Pultzer Prize winning story about the Rohingya.

“As part of writing out story, we asked Chutima to assist in arranging appointments for our journalists as part of our news gathering,” the Reuters spokesman said.

“She did not act as a Reuters journalist or stringer and her contribution to the story was limited to arranging these appointments.”

The spokesman said Reuters stands by the “fairness and accuracy of our Rohingya coverage, support the principles of a free press everywhere in the world – and the rights of journalists to go about their jobs without fear or hindrance in reporting the truth.”

Cdr Thanom Lumzaie initially filed a criminal complaint against Reuters and two of its journalists over its Rohingya coverage as well. However, the navy has not pursued the case against Reuters.