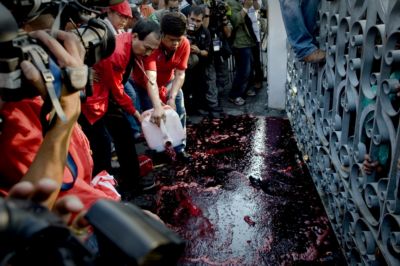 PHUKET: Protesters spilled what they say is their own blood at the gates of Thailand’s Government House late yesterday in what canada.com described as “a colourful act of political theatre” designed to propel their fugitive hero Thaksin Shinawatra back into power.

Thousands of ‘Red Shirts’ loyal to the deposed premier queued up during the day to donate blood in makeshift tents, where it was poured from syringes into five-litre water bottles for the bizarre spectacle.

It was the latest part of a pro-Thaksin demonstration which has drawn less than 100,000 protesters to the streets of Bangkok since the weekend, according to police, watched over by a 50,000-strong contingent of security forces.

The Red Shirts, whose numbers appeared to be dwindling on Wednesday, held the blood bottles in the air triumphantly as they rode on trucks followed by thousands of supporters and monitored by riot police.

Meanwhile, Phuket and all other provinces outside Greater Bangkok remain quiet and largely unaffected by the fervor in the capital.

The Jakarta Post
The Thai Parliament postponed a scheduled session Tuesday as protesters continued to occupy the streets of the main government district in Bangkok.

The speaker of the House of Representatives, Chai Chidchob, ordered the postponement of a joint session of parliament after most members, including the Prime Minister, did not show up.

The strategy of the Red Shirts appears to be to disrupt the government for as long as possible, in the hope that the prime minister blinks.

Reuters
The absence of violence during the protests in Thailand, and a growing view that Prime Minister Abhisit Vejjajiva can ride out the crisis lifted Thai stocks 1.4 percent by midday.

Despite the tensions, foreign investors have been buyers of Thai stocks for the past 15 sessions, scooping up a net $850 million over that period, although volumes slowed this week.

“If we can get past this week, things should return to normal and fund flows should start building up again,” said Patareeya Benjapolchai, president of the Stock Exchange of Thailand.
Australians advised to avoid Thailand

The Star
The Australian government re-issued its travel warning for Thailand yesterday, warning of a strong possibility of violence and civil unrest due to the political protests in Bangkok. The travel advisory urges travelers to use a “high degree of caution” throughout Thailand and said demonstrations could develop quickly and turn violent with little warning.
Thai tourism suffering from protests

CNN
Thailand’s tourism minister estimated the demonstrations might have resulted in a 20 percent drop in tourists. The impact on Chinese visitors appears to have been greater, with the Chinese Chamber of Commerce reporting a 50 percent cancellation rate.